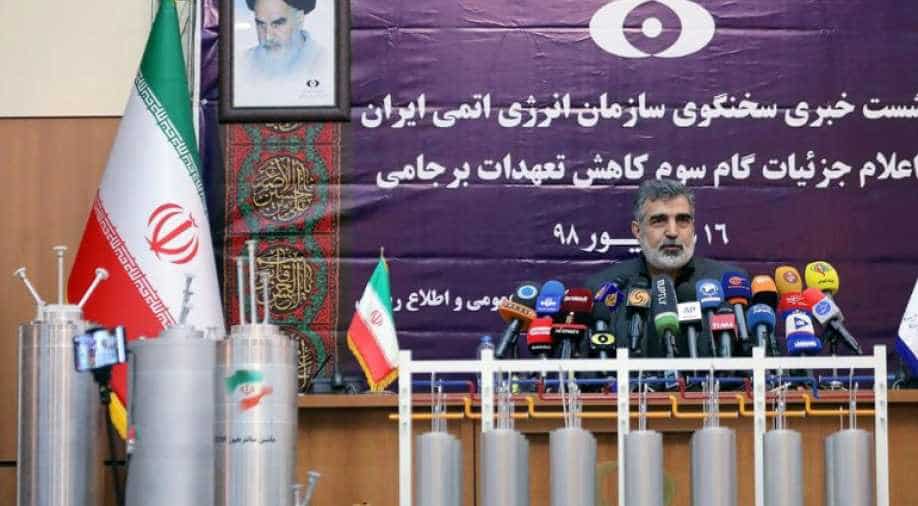 Iran said Saturday it had fired up advanced centrifuges to boost its enriched uranium stockpiles, its latest scaling-back of commitments under a crumbling 2015 nuclear deal.

The Islamic republic was acting on a threat to further abandon its nuclear commitments based on a deadline it set for European powers to do something to shield it from US sanctions.

"The centrifuge machines, as they are engaged in research and development, will help with increasing the stockpile," spokesman Behrouz Kamalvandi said.

"The capacity of these machines is many times more than the previous machines. This started as of yesterday (Friday)," he told a news conference in Tehran.

Under the 2015 Joint Comprehensive Plan of Action (JCPOA), Iran was allowed to enrich uranium using only first-generation -- or IR-1 -- centrifuges.

Tensions have been escalating between Iran and the United States since May last year when President Donald Trump pulled out of the accord and began reimposing sanctions that have crippled the Iranian economy.

The arch-foes were on the cusp of confrontation in June when Iran downed a US drone and Trump ordered retaliatory strikes, before cancelling them at the last minute.

Britain, France and Germany have repeatedly said they are committed to saving the deal that gave Iran relief from sanctions in exchange for curbs on its nuclear programme, but their efforts have so far borne little fruit.

Iran said on Saturday it was capable of enriching uranium beyond 20 per cent but for now it had no plans to do so.

"Our plan is that if the other parties act on their commitments, we too return to our commitments," said Kamalvandi.

Britain called Iran's move "particularly disappointing at a time when we and our European and international partners are working hard to de-escalate tensions".

The European Union on Friday voiced "great concern" over the country's decision to roll back its commitments and emphasised its own reliance on the International Atomic Energy Agency to monitor Iran's nuclear activities.

Despite the decision to further step back from the 2015 deal, Kamalvandi said Iran would allow the IAEA to continue monitoring its nuclear facilities in accordance with the 2015 accord.

"Regarding the monitoring and accesses of the IAEA... so that everything is clear (Iran's) commitments regarding transparency will be followed as before," the spokesman said.

In its latest report on August 30, the watchdog said it continues to verify compliance through cameras and on-site inspections.

But in an apparent hint at worries about access, it said "ongoing interactions... require full and timely cooperation by Iran".

US national security advisor John Bolton tweeted on Saturday that the inspection came as the "IAEA informs its Board that #Iran may be concealing nuclear material and/or activities".

He said the US and other IAEA member states were "eager to get a full report as soon as possible".

Early Saturday, the IAEA had noted Iran's latest move and indicated its inspectors were ready to check its compliance.

"Agency inspectors are on the ground in Iran and they will report any relevant activities to IAEA headquarters in Vienna," spokesman Fredrik Dahl said.

Iran's new step came after Britain, France and Germany failed to find a way to offset the impact of sanctions against Iran before a September 7 deadline set by the Islamic republic.

"If Europe wants to do something, it must hurry, because returning to the situation before reducing commitments could take time," Kamalvandi said.

Tehran has already hit back twice with countermeasures in response to the US withdrawal from the 2015 deal.

On July 1, it said it had increased its stockpile of enriched uranium to beyond the 300-kilogram maximum set by the deal.

A week later, it announced it had exceeded a 3.67-per cent cap on the purity of its uranium stocks.

Saturday's developments came on the eve of a visit to Iran by the acting head of the IAEA, Cornel Feruta.