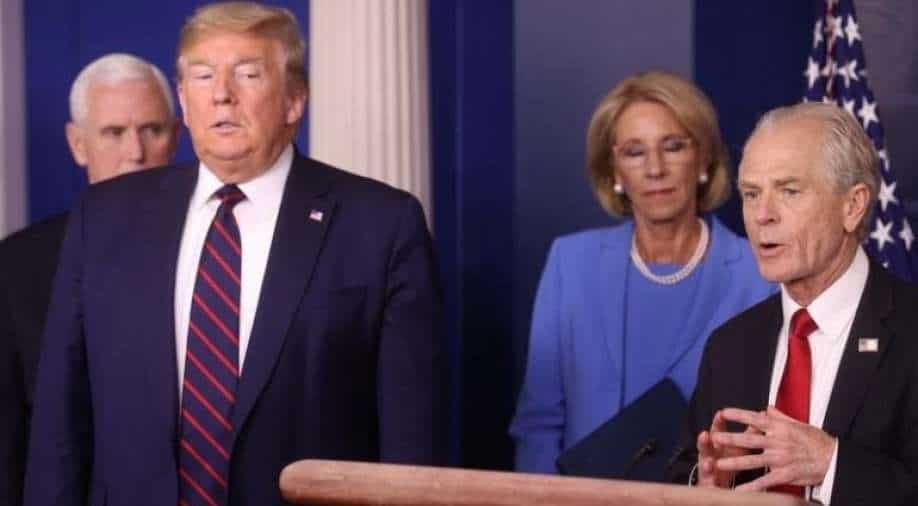 Navarro sounded an early alarm about supply shortages, according to emails and other documents released by a House committee overseeing the federal coronavirus response

The Trump administration was so slow to prepare for the coronavirus pandemic that a top aide to President Donald Trump took matters into his own hands.

That aide, Peter Navarro, Trump’s deputy assistant and trade adviser, personally steered hundreds of millions of dollars in contracts for pandemic supplies to politically connected or novice companies, a preliminary investigation by House Democrats has found.

Navarro sounded an early alarm about supply shortages, according to emails and other documents released by a House committee overseeing the federal coronavirus response. In a memo dated March 1, 2020, he complained that “movement has been slow.”

After that, documents show, he prodded the Federal Emergency Management Agency to award a $96 million sole-source contract for respirators to AirBoss Defense Group, a defense industry supplier, telling a company executive “everything you requested is OK,” even though no contract had been signed.

The agency awarded the sole-source contract six days later. AirBoss was represented by a retired Army general, Jack Keane, who had been awarded the Presidential Medal of Freedom by Trump just days before the contract was issued

In a statement, Navarro said he wanted to move aggressively to combat the threat of the virus.

Also read | 'Miss me yet?': Donald Trump shocks everyone by making wedding speech about himself

“In a war, you need to move with warp speed,” he wrote. “My mission was to assist the president in saving lives, which we undeniably did. Given the same set of facts, I would do everything exactly the same. Full stop!”

But the Democrats, led by Rep. James C. Clyburn of South Carolina, the No. 3 House Democrat, questioned Navarro’s efforts.

They noted that officials in Navarro’s office had coordinated with executives at the Eastman Kodak Co., best known for its photography business, which then entered into a letter of intent in June 2020 to collaborate on the domestic manufacture of pharmaceutical agents, even though the company had no experience in that field.

Navarro also pushed for the Trump administration to award a $354 million contract to Phlow, a brand-new company in Richmond, Virginia, to manufacture generic medicines and pharmaceutical ingredients — an effort aimed at building up an American manufacturing base for products that were needed to treat COVID-19 but were made overseas. The Democrats’ investigation found that Navarro had been introduced to Phlow’s chief executive in November 2019.

“My head is going to explode if this contract does not get immediately approved,” Navarro wrote to top federal health officials in March 2020. “This is a travesty. I need PHLOW noticed by Monday morning. This is being screwed up. Let’s move this now. We need to flip the switch and they can’t move until you do. FULL funding as we discussed.”