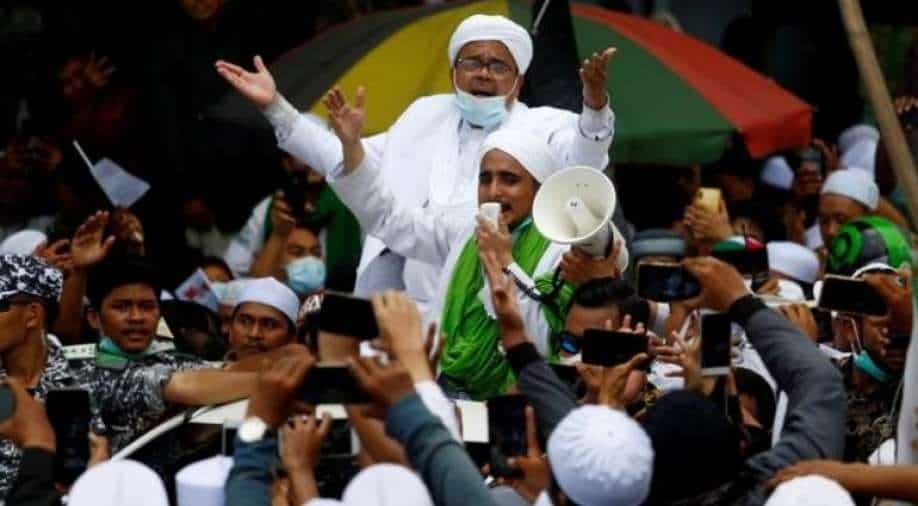 Rizieq Shihab, Indonesian Islamic cleric and the leader of Islamic Defenders Front, turned himself in for violation of COVID-19 restrictions. Photograph:( Reuters )

If proven guilty, Rizieq Shihab can face a jail time of up to six years for consciously violating health regulations

Dressed in a white robe, turban and a face mask, the Indonesian cleric and leader of the Islamic Defenders Front, Rizieq Shihab, turned himself in following accusations of flouting COVID-19 restrictions.

Shihab walked to the Jakarta police without any hesitations for questioning of accusations of bypassing all restrictions imposed to contain the spread of the novel coronavirus by holding mega rallies with huge crowds. "With God’s permission, I can come to the Jakarta Police for an investigation according to the laws and regulations," he said.

The Jakarta Police has accused him of this crime after he hosted a gathering to celebrate Prophet Muhammad’s birthday and also celebrated his daughter's wedding — attracting huge crowds in both the events, Jakarta police spokesman Yusri Yunus reported.

These two events are not the only ones in which health regulations were ignored. There have been several other events in Jakarta and West Java where large crowds of his supporters gathered to greet the leader who has recently returned from a three-year exile in Saudi Arabia. He was charged in pornography case and with insulting the official state ideology in 2017 when he had visited Saudi Arabia for a pilgrimage to Mecca.

If proven guilty, Shihab can face a jail time of up to six years for consciously violating health regulations and obstructing law enforcement amid a pandemic.

Jakarta Gov. Anies Baswedan and West Java Gov. Ridwan Kamil are also being questioned in the matter for allowing Shihab to organise these events amid a pandemic.

As of now, Indonesia has reported a tally of more than 600,000 cases of the deadly virus — making it the first affected country in Southeast Asia and second in Asia, after India's tally of nearly 9.8 million cases.