A wax figure depicting US President Donald Trump is put into a dumpster at Madame Tussauds in Berlin, Germany Photograph:( Reuters )

It is now the last day for Americans to cast their ballots for the US election 2020 and choose their next President out of the Republican candidate Donald Trump and Joe Biden.

As the final day of voting starts, the predictions are also being made about who will be the next representative of the White House for the next four years. One such prediction has been made by an Indian astrologer 'Tripathi ji' has made his predictions according to the study of the planets and stars, and his answer is different from the rest. 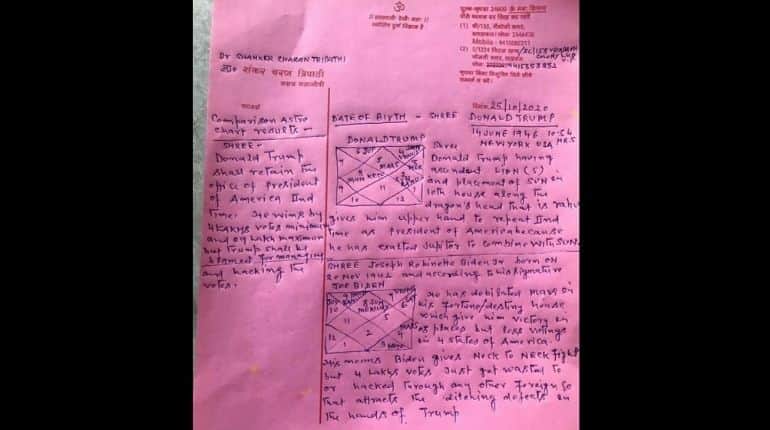 As per the predictions made by him, the current President Donald Trump will start his second term and continue living in the White House. Tripathi ji claims that the ruled of the  Aquarius sign, Rahu, will help Trump win the election this year. "Shree Donald Trump having ascendant lion and placement of sun in 10th house along the dragon's head that is rahu gives him upper hand to repeat the second term as President of America because .. has exalted Jupiter to combine with sun," the prediction reads.

He also predicted that Trump will win by nearly 0.4 million votes against the former Vice President Joe Biden. This prediction is contrasting with majority of the other polls that suggest Biden's win, till now. However, experts have also hinted towards a sudden shift in the final hours of election as many voters who have to cast their ballots had admitted to voting for Donald trump, instead of the Democrat candidate.

One twist in his prediction, however, is that Trump will not have a smooth win. The Indian astrologer has predicted that Trump will be blamed for manipulation and hackling of votes. This has come as an expected prediction as Trump has been warning against a smooth transition of power, if he loses, and he has also been accused of interfering in the election process.

The Indian astrologer is one of the few to predict Trump's win. Meanwhile, American media house CNN International condicted various opinion polls and concluded that Joe Biden is leading in Michigan and Wisconsin by a large margin, and Trump is chasing Biden with a close competition in North Carolina and Arizona. Similarly, Real Clear Politics which maintains an average of major opinion polls has predicted Biden's lead in the key battleground states by 2.9 percentage points, which comes within a margin of error.