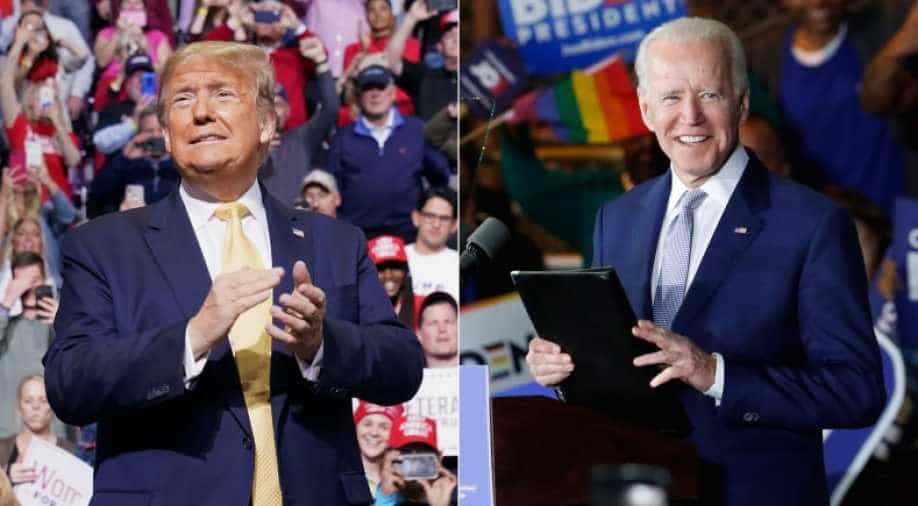 With President Donald Trump and his Democratic challenger, Joe Biden locked in a dead heat on the eve of the US election 2020, the polls are trying the gauge the preference of the nation.

Latest opinion polls indicate the US presidential race is headed for a tight finish with the margin between Trump and Biden shrinking, particularly in key battleground states.

YouGov America's final poll ahead of the election gives Joe Biden a 9-point lead over Donald Trump, with the Democrat on 53.2 per cent compared to the Republican's 44.3 per cent. The research group suggests this would convert into an electoral college 364—174 majority for Biden. The threshold to win is 270.

Its poll gives Biden a large majority among people who have already voted — and a large majority for Trump among those who intend to turn out on election day. A breakdown of the figures suggests a tight race in some key states.

YouGov says it has carried out more than 99,000 interviews, including over 1,400 in the final 24-hour period, for its weekly polling.

A CNN Poll of Polls tracking the average poll result in the race gives Biden a 10-point lead of 52 per cent to Trump's 42 per cent. But the US broadcaster points out that the president is elected by the electoral college, not the popular vote which national polls can only approximate.

The website FiveThirtyEight, which focuses on opinion poll analysis, says Biden is "clearly favoured" to win the election, coming out top in 90 per cent of its simulations. But, it adds, bigger polling errors have happened in the past — pointing out that a 10 per cent chance attributed to Trump "is roughly the same as the odds that it’s raining in downtown Los Angeles. And it does rain there".

An analysis by RealClearPolitics of "top battleground" states gives Biden the lead in five out of six — in Florida, Pennsylvania, Michigan, Wisconsin and Arizona. Trump is given a 0.6 per cent lead in North Carolina. But of the five states the polling aggregator suggests are leaning towards Biden, only in two does the Democrat's lead the top five per cent.

Trump has advanced to a 7-point lead over Biden in Iowa, 48 per cent to 41 per cent, according to a Des Moines Register/Mediacom poll. But a RealClearPolitics polling average for the state puts the incumbent president's lead at under one percent — with Trump on 46.5 per cent and Biden on 45.8 per cent.

In Euronews' previous analysis of the polls early last week, they reported that the Democrat's poll rating had increased by several percentage points over the incumbent.

Some conservative commentators argue that despite survey adjustments made by pollsters since 2016, they are still ignoring factors that do not show up in their polls — which they suggest underestimate the level of support for Trump.