In Hawaii, fears grow over unsafe levels of petroleum in drinking water 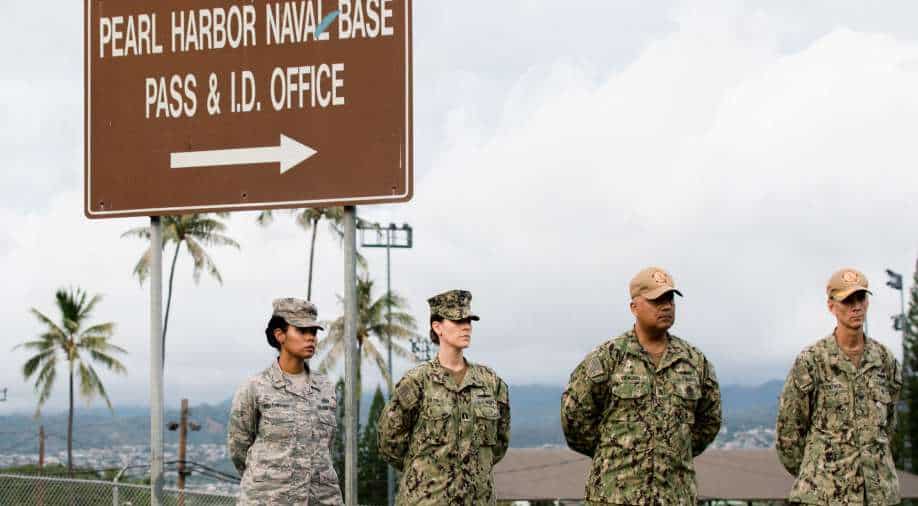 Hawaii health officials have instructed residents living at an Oahu military base to avoid drinking their tap water after high concentrations of diesel fuel were discovered in at least one well, contaminating a system used by tens of thousands of people and several day care centers and schools.

State health officials announced Friday that testing of a well overseen by the Navy had detected gasoline- and diesel-range hydrocarbons at levels up to 350 times what the state considers safe for drinking water.

The well, known as the Red Hill shaft, is one of three wells that are run by the Navy. Last month, the Navy began receiving complaints from residents of Joint Base Pearl Harbor-Hickam who said their water tasted and smelled like gas.

Since then, the Navy has shut down two of its wells, relocated more than 3,000 families to hotels across the island and distributed bottled water to families and officials.

“The Navy is responsible for this crisis,” Adm. Samuel Paparo, commander of the U.S. Pacific Fleet, said Friday at a public hearing with Navy officials and state legislators. “We are taking ownership of the solutions, and we are going to fix it. We are in the process of fixing this.”

The wells are part of three groundwater sources that provide drinking water to the Joint Base Pearl Harbor-Hickam water system, which serves residents of military housing, the Aliamanu Military Reservation, and several elementary schools and day care centers.

On Thursday, the Navy said it had found “elevated” amounts of “total petroleum hydrocarbon” in samples taken near another groundwater source, the Aiea Halawa well, which was shut down December 3. That discovery was announced about a week after the Navy said samples taken from the Red Hill shaft showed the water had been contaminated.

The state said about 93,000 people have been affected.

Residents have complained of sickened pets and reported symptoms including sore throats, stomach pain, headaches, diarrhea and vomiting. Health officials said people who were exposed to the contaminated water could also experience difficulty breathing, coughing and red or peeling skin.

“The level of this contaminant poses a public health threat, and is considered unsafe to drink,” Kathleen Ho, deputy director for environmental health at the Hawaii State Department of Health, said in a statement. “We will continue to take all possible action to protect public health and the environment.”

People were also instructed to avoid cooking with the water, bathing in it or washing dishes and clothes.

“This includes consumption by pets,” the department said.

Health officials said that for the moment, they do not expect long-term health effects to result from the exposure.

Navy officials said they believed that the water in the Red Hill well was contaminated after jet fuel spilled into an access tunnel at the site on November 20. The spill was cleaned up in 24 to 30 hours, according to the Navy, but not before it leached into the water system.

“I deeply apologize to each and every one of you and to the people of Hawaii that this incident may have been destructive to your lives in any way,” Del Toro told residents of the base Sunday during a four-hour community meeting.

Health officials in Hawaii have ordered the Navy to clean up its water system and suspend operations at Red Hill.

Gov. David Ige and members of Hawaii’s congressional delegation have described the contamination issue as a “crisis.”

Sen. Brian Schatz, D-Hawaii, said the Environmental Protection Agency should take full control of testing and analyzing the water in the system.

“We need a trusted independent agency with deep expertise and a mission of environmental protection to take over,” he said in a statement.

Del Toro said last weekend that he was determined to get to the “root cause of this problem” and fix it so that “you can feel confident that the water you are drinking is safe.”

Navy officials said at the hearing Friday that they planned to clean up the Red Hill well by flushing it with 25 million gallons of clean water.

The Navy said it would then flush out the water systems in every house and building that had experienced contamination.

The plan is to get people back in their homes by Christmas, said Rear Adm. Dean VanderLey, a goal he acknowledged was “very aggressive.”

“That remains my personal goal for the sake of our families,” he said.