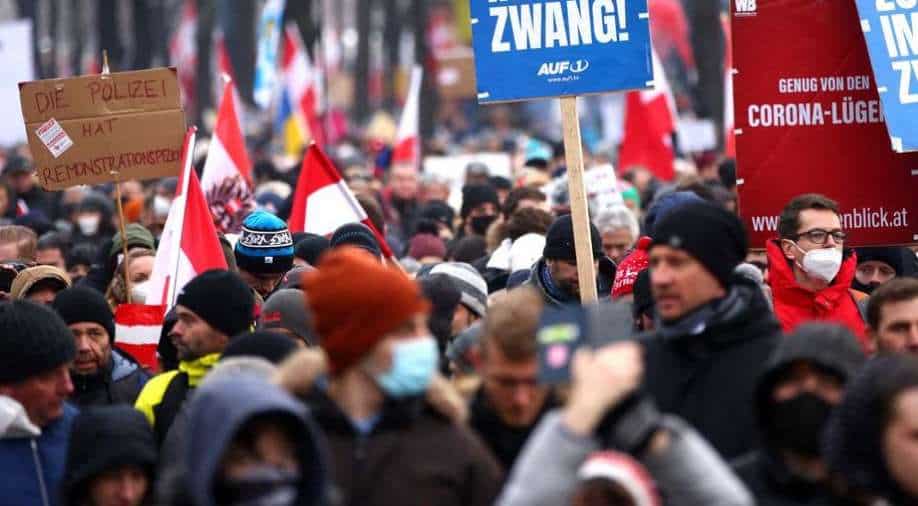 As per the government, nobody will be vaccinated forcefully. However, those who have not received the jab will need to pay an initial fine of $670

Nearly 44,000 people gathered in Austria's Vienna to protest against mandatory Covid vaccines. Europe is currently seeing a surge in infections amid concerns of the new Covid variant, Omicron.

Protestors were seen holding placards that read, "No to vaccine fascism," "I'm not a neo-Nazi or a hooligan," and, "I'm fighting for freedom and against the vaccine," states AFP.

Nearly 68 per cent of the country's population is fully vaccinated. This accounts for one of the lowest rates in Western Europe.

The government in Austria has stated that those who have not received the required vaccine dose will need to stay at home as it makes the vaccine mandatory from February for all residents older than 14.

As per the government, nobody will be vaccinated forcefully. However, those who have not received the jab will need to pay an initial fine of $670. This can further go upto $4,000, if not settled.

Over 44,000 have taken to the streets in Vienna, Austria to protest against medical segregation and lockdown for the unvaccinated.pic.twitter.com/K6SwuEX0oh

Austria rises up against the mandate madness being inflicted upon them.

According to a tally by the Johns Hopkins University, Austria has confirmed 1.2 million infections with nearly 13,000 fatalities since the start of the pandemic.

This comes a few days after a Reuters tally stated that Europe has surpassed 75 million coronavirus cases. The European

Union's public health agency has warned that within a few months, the new Covid variant could be responsible for more than half of all the cases.

Before Omicron was even discovered, Europe had become the epicentre of the pandemic, for the second time.

The WHO had warned that 700,000 more people could die from coronavirus by March 2022, taking the total to above 2.2 million. WHO had said that it is expected that there will be high or extreme stress on hospital beds in 25 countries.