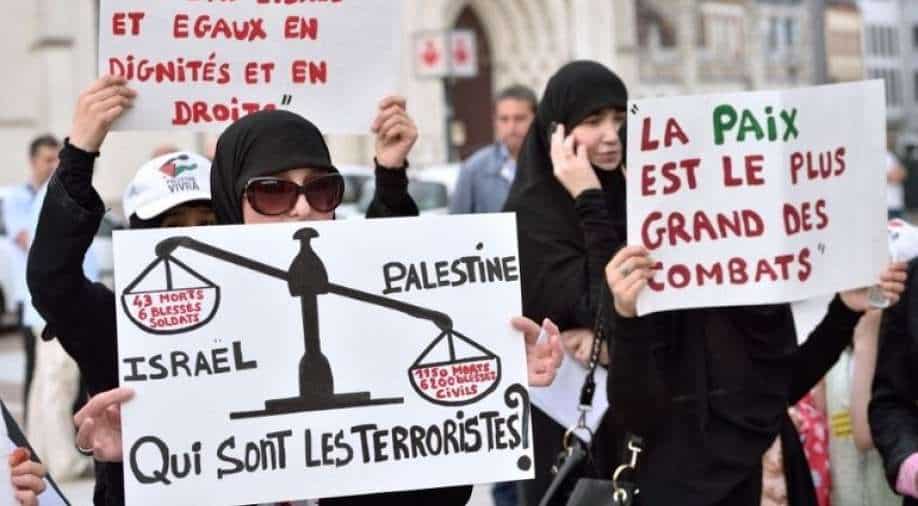 Some 150 members of a pro-Palestinian group take part to a protest against Israel's military intervention in the Gaza strip and denouncing "Crimes against Humanity" perpetrated in the Palestinian territories Photograph:( AFP )

In the past, Israeli officials have accused the court of overstepping its bounds, saying the Palestinians are not an independent sovereign state

The International Criminal Court prosecutor on Wednesday announced that she had launched an investigation into alleged crimes in the Palestinian territories.

ICC prosecutor Fatou Bensouda has previously said there is a "reasonable basis" to believe crimes were committed by members of the Israeli Defence Forces, Israeli authorities, Hamas and Palestinian armed groups during the 2014 Gaza conflict.

"Today, I confirm the initiation by the office of the prosecutor of the International Criminal Court of an investigation respecting the situation in Palestine," Bensouda said in a statement.

Bensouda said there were "admissible potential cases" for the war crimes court, which was set up in 2002.

The prosecutor said the probe would be conducted "independently, impartially and objectively, without fear or favour".

"In the end, our central concern must be for the victims of crimes, both Palestinian and Israeli, arising from the long cycle of violence and insecurity that has caused deep suffering and despair on all sides," she said.

The Palestinians joined the court in 2015 and have long pushed for an investigation of Israel, which is not a member of the court. The Palestinians asked the court to probe Israeli actions during its 2014 war against Palestinian militants in the Gaza Strip, as well as Israel's construction of settlements in the occupied West Bank and annexed east Jerusalem.

In the past, Israeli officials have accused the court of overstepping its bounds, saying the Palestinians are not an independent sovereign state.

Officials say that Israel has been unfairly singled out and reject the allegations. They say military actions in Gaza were acts of self-defence and the status of the West Bank is disputed and must be resolved through negotiations.

The investigation will likely also look into alleged crimes by Palestinian militants. Bensouda has said her probe would look into the actions of Hamas, which fired rockets indiscriminately into Israel during the 2014 war.

Bensouda said how prosecutors prioritise their work will be ''determined in due time'' based on constraints including the coronavirus pandemic, limited resources and their existing heavy workload.

''Such challenges, however, as daunting and complex as they are, cannot divert us from ultimately discharging the responsibilities that the Rome Statute places upon the Office,'' she said, referring to the court's founding treaty.

Israel is not a member of the Hague-based ICC and has vehemently opposed any probe, but Palestine has been a state party to the court since 2015.

ICC judges paved the way for a war crimes investigation when they ruled a month ago that the court has jurisdiction over the situation due to Palestine's membership.

Bensouda said in December 2019 that she wanted a full investigation after a five-year preliminary probe, but asked the court to rule whether its reach extended to the Palestinian territories.

"As prime minister of Israel, I can assure you this: we will fight this perversion of justice with all our might," Netanyahu said in a statement, railing against any probe into "fake war crimes".

The US State Department said at the time it had "serious concerns" about the ICC ruling, adding that Israel should not be bound by the court as it was not a member.

Palestinian prime minister Mohammed Shtayyeh had praised February's ICC ruling as "a victory for justice and humanity" while Hamas said it wanted to "bring the Zionist criminals of war before international courts and hold them responsible".

Israel occupied the West Bank and the Gaza Strip in the Six-Day War of 1967, and later annexed mostly Arab east Jerusalem.

Today they are home to at least five million Palestinians defined by the United Nations as living under Israeli occupation.

The Gaza Strip is blockaded by Israel and ruled by the Islamist Hamas group.

The Israel-Palestinians probe will prove the first major test for incoming ICC prosecutor Karim Khan, the British lawyer who was elected in February to replace Bensouda when her mandate ends in June.

Bensouda is under US sanctions for her decision to investigate alleged US war crimes in Afghanistan, but Washington has also strongly criticised the Palestinian probe.