'I will never go back': Traumatised bushfire evacuees land in Melbourne 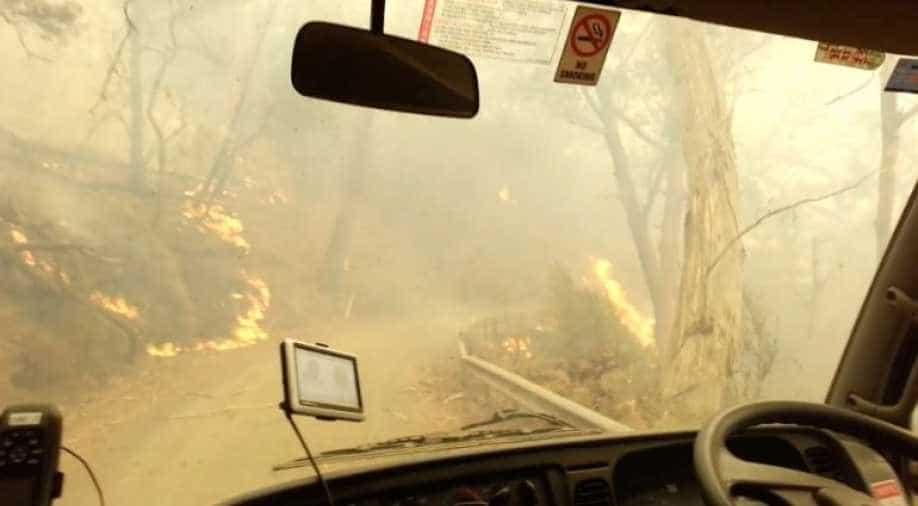 Teenagers, couples, seniors and families, plus dozens of pets,113 dogs from dachshunds to Alsatians, three cats, a rabbit and a bird, arrived on the naval ships Sycamore and Choules at a port of Hastings.

Over 1,000 residents and vacationers who had been stranded on a beach by bushfires in southeastern Australia landed near Melbourne on Saturday after a 20-hour journey on two ships, relieved to escape terrifying smoke and fire.

Teenagers, couples, seniors and families, plus dozens of pets,113 dogs from dachshunds to Alsatians, three cats, a rabbit and a bird, arrived on the naval ships Sycamore and Choules at a port of Hastings. They were then transferred in buses to two relief centres.

“For someone who’s never been in a fire, it’s very, very, frightening. I’m so happy to be here,” said Emily Wellington, a 16-year-old from Melbourne who had been in Mallacoota on a two-week holiday with family friends.

She and two other 16-year-olds were among the first 58 evacuated from the smoke-filled town as they have asthma. “They wanted us to get out so we don’t get sick,” Wellington said.

They spoke to reporters outside a relief centre about 65 kilometres (40 miles) southeast of Melbourne shortly after getting off the Sycamore at Hastings.

The Choules, a much bigger ship, arrived on Saturday afternoon with 1,025 evacuees on board.

Two hundred of them headed by bus to Melbourne’s convention centre. Melbourne Mayor Sally Capp greeted them on the bus to let them know they would have access to food, drink, showers, insurance services and Red Cross help.

“I’m sorry you’ve been through such a terrible time,” she said, to applause.

James Corrigan spent a harrowing 24 hours packed with eight friends in a sport utility vehicle on the beach in Mallacoota when fires roared through the town on New Year’s Eve. He said it was a relief to be back in Melbourne.

“It was pretty scary. The night before the fire hit, no one got any sleep at all,” he said. “It was pitch black during the day.”

The friends feared for their lives, while they sought shelter near water, he said.

“We were worried the fire would be really hot with embers coming through,” Corrigan told media by phone from the bus.

“There was a period of not knowing how we’d get out,” he said, referring to the days after the fires died down.

One of the teens on the first ship, Darcy Brown, lost her family home in Mallacoota. They had moved in there just a month ago.

“It was so devastating to see. All the tin is flat to the ground. Some of the bricks are still standing,” Brown told reporters.

Vacationers left cars and caravans behind in Mallacoota, not knowing how they will get them back, while some have stayed there while sending children back to Melbourne.

Authorities have said it might take weeks to reopen the one road out of Mallacoota.

One traumatised elderly woman, Rosa, choked up as she talked to reporters about the fires.

“It was terrible. I will never go back,” she said.

But like many others, she praised the Australian navy and all the volunteers in the relief effort for bringing them safely back to Melbourne.

“It was so comfortable on the ship,” said teenage evacuee Wellington..

Back in Melbourne, everyone was eager to shower and put their smoke-tainted clothes in the wash. What were they going to do first?