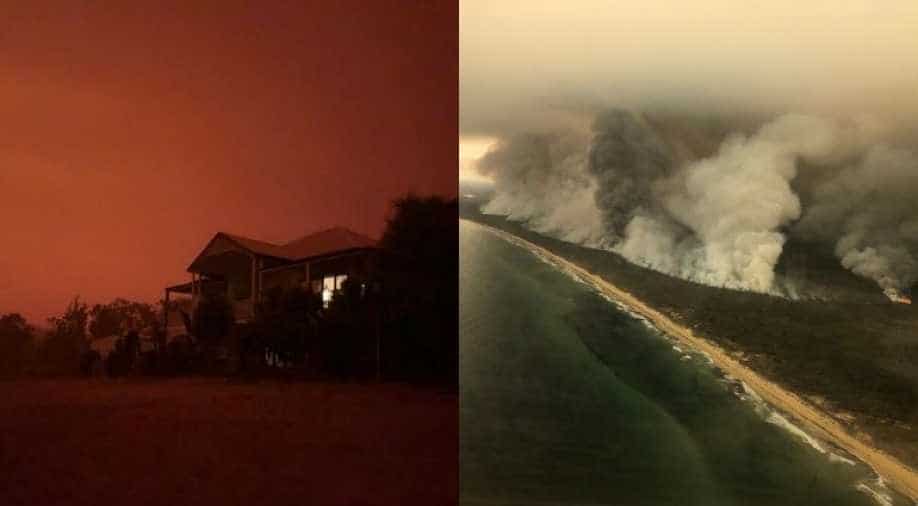 On Saturday, the New South Wales Rural Fire Service (RFS) warned that a fire on the coast was generating its own weather system 287 km (178 miles) south of Sydney.

The bushfires ravaging Australia are generating so much heat that they are creating their own weather systems including dry lightning storms and fire tornadoes.

On Saturday, the New South Wales Rural Fire Service (RFS) warned that a fire on the coast was generating its own weather system 287 km (178 miles) south of Sydney.

"A fire-generated thunderstorm has formed over the Currowan fire on the northern edge of the fire near Nowra. This is a very dangerous situation. Monitor the conditions around you and take appropriate action," the RFS said on social media.

The weather conditions are the results of the formation of pyrocumulonimbus clouds. They have been recorded all over the world but as the global climate changes, they may become a more frequent occurrence for Australians, the country's Climate Council said in a 2019 report.

An RFS firefighter was killed on Monday by a fire tornado caused by the collapse of a pyrocumulonimbus cloud formation that rolled over the fire truck he was in.

Shane Fitzsimmons, the NSW RFS commissioner, pointed to that death when asked about the fire-induced weather patterns.

"That extraordinary event resulted in cyclonic-type base flipping over a 10-tonne truck. That is the volatility and danger that exists," he said.

The pyrocumulonimbus clouds are essentially a thunderstorm that forms from the smoke plume of fire as intense heat from the fire causes air to rise rapidly, drawing in cooler air, according to information from the Australian Bureau of Meteorology.

As the cloud climbs and then cools in the low temperatures of the upper atmosphere, the collisions of ice particles in the higher parts of the cloud build up an electrical charge, which can be released as lightning.

These can cause dangerous and unpredictable changes in fire behaviour, making them harder to fight as well as causing lightning strikes that could ignite new fires.

The rising air also spurs intense updrafts that suck in so much air that strong winds develop, causing a fire to burn hotter and spread further.