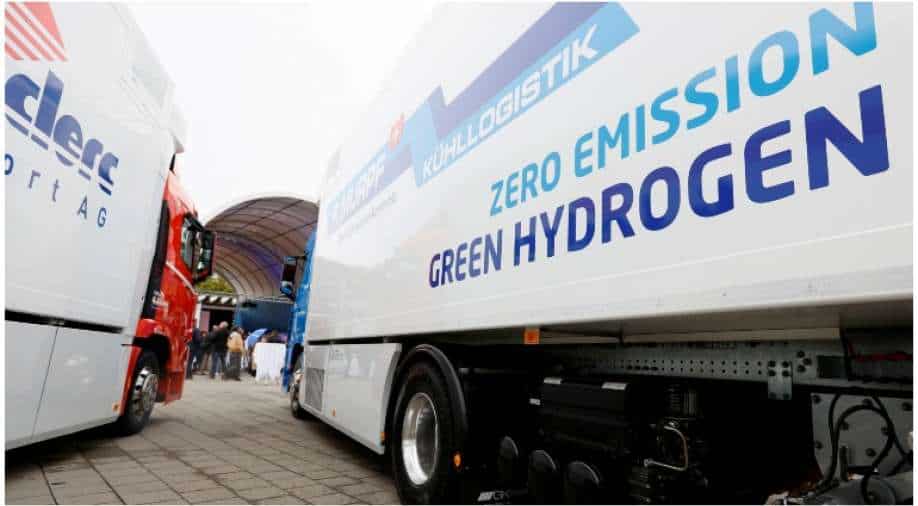 FILE PHOTO: A new hydrogen fuel cell truck made by Hyundai is pictured ahead of a media presentation for the zero-emission transport of goods at the Verkehrshaus Luzern (Swiss Museum of Transport) in Luzern, Switzerland October 7, 2020 Photograph:( Reuters )

Governments must step up investment in low-carbon hydrogen to unlock its potential. It is need to help the world achieve net zero emissions, with $1.2 trillion needed by 2030. The governments with hydrogen strategies have committed $37 billion so far. The private sector has announced $300 billion. Only three countries, France, Japan and South Korea, had hydrogen strategies in 2019, but 17 do now and 20 others are working on one

Governments must step up investment in low-carbon hydrogen to unlock its potential and help the world achieve net zero emissions, with $1.2 trillion needed by 2030, the International Energy Agency said on Monday.

Governments with hydrogen strategies have committed $37 billion so far, while the private sector has announced $300 billion, said the IEA, which advises developed countries on energy policies.

Only three countries, France, Japan and South Korea, had hydrogen strategies in 2019, but 17 do now and 20 others are working on one, the IEA said in its Global Hydrogen Review for 2021.

There are pilot projects to produce steel and chemicals with low-carbon hydrogen, the report noted.

The technology also has potential in other sectors where emissions are difficult to reduce, including long-haul trucking, shipping and aviation, the agency said.

"We have experienced false starts before with hydrogen, so we can't take success for granted," said IEA executive director Fatih Birol.

"But this time, we are seeing exciting progress in making hydrogen cleaner, more affordable and more available for use across different sectors of the economy," he said.

Birol urged governments to "take rapid actions to lower the barriers that are holding low-carbon hydrogen back from faster growth, which will be important if the world is to have a chance of reaching net zero emissions by 2050."

Nearly all hydrogen produced today comes from fossil fuels and releases 900 million tonnes of CO2 emissions -- as much as Britain and Indonesia combined, according to the IEA.

Low-carbon hydrogen requires large amounts of electricity to produce it from water, or the use of carbon-capture technologies if it is to be made from fossil fuels, it said.

"The main obstacle to the extensive use of low-carbon hydrogen is the cost of producing it," the report said.

The report comes as governments prepare for the COP26 climate summit in Scotland next month.

Candidates have until Friday to file their official certificates to contest the polls.

The EU had yet to formally reply to UK proposals made in July to reform the so-called Northern Ireland Protocol, he noted.

"But from what I hear, I worry that we will not get one which enables the significant change we need.

"So I urge the EU to be ambitious. It's no use tinkering around the edges.  We need significant change," Frost said.

"But we cannot wait for ever. Without an agreed solution soon, we will need to act, using the Article 16 safeguard mechanism, to address the impact the protocol is having on Northern Ireland."

The protocol formed part of the UK's drawn-out divorce from the EU, and was designed to prevent unchecked goods heading into the bloc's single market via the UK's only land border with the EU to Ireland.

But pro-UK unionists in Northern Ireland are opposed, arguing that border checks on goods from mainland Great Britain -- England, Scotland and Wales -- effectively creates a border in the Irish Sea, compromising the province's place in the wider UK.

Brussels insists that the protocol is not up for renegotiation, and could trigger trade reprisals should the UK invoke its Article 16, which would suspend the pact owing to extraordinary circumstances.

"That may in the end be the only way to protect our country -- our people, our trade, our territorial integrity, the peace process, and the benefits of this great UK of which we are all part," Frost warned.

Addressing the annual conference of the ruling Conservative party, Brexit minister David Frost said: "The long bad dream of our EU membership is over.

Domagoso, 46, popularly known by his celebrity nickname Isko Moreno, and his running-mate Willie Ong, a doctor with more than 16 million followers on Facebook, filed their certificates of candidacy at the Commission on Elections, reports Xinhua news agency