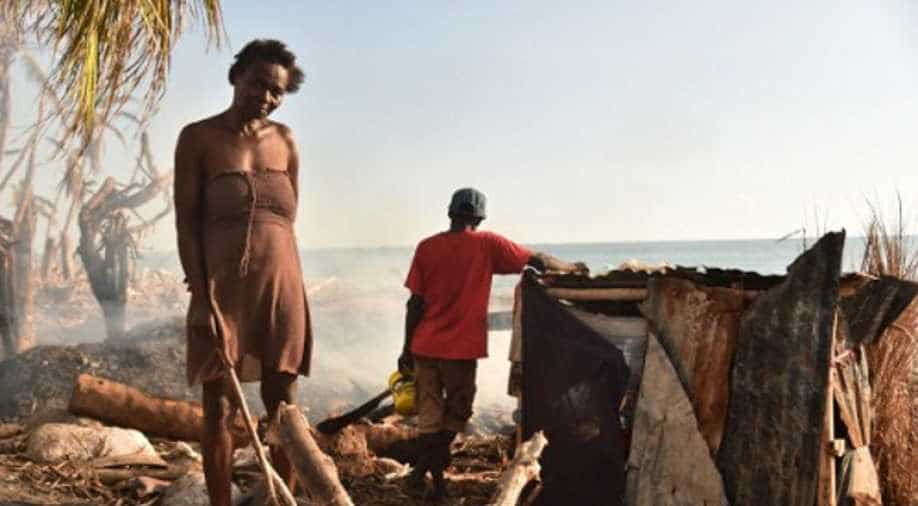 Hurricane Matthew killed over 1,000 people and over 1.4 million are in dire need of humanitarian aid. Photograph:( Getty )

Haiti launched its ill-fated presidential campaign for the fifth time in a year on Thursday, but people in the hurricane-destroyed southwestern town of Jeremie have more pressing concerns, such as staying alive and finding a home.

"We don’t have anywhere to live, cholera is killing people,” said Joselyne Saint Preux, who, along with dozens of others, has stayed in a school being used as a shelter since Hurricane Matthew flattened much of the port town a month ago.

"We’d like the elections to take place, but we need the government to make decisions about us,” said 29-year-old Saint Preux, who'd made a living as a street vendor before the disaster struck.

Matthew killed up to 1,000 people and 1.4 million remain in need of humanitarian aid, while tens of thousands are packed into schools and other buildings used as polling centers, raising questions about the viability of the vote set for November 20.

The storm has triggered one disaster after another.

The area's fertile farms lost their crops, raising fears of famine. Water and sanitation systems were destroyed, leading to a flare-up of cholera that had been all but conquered in the region.

Flooding has compounded the damage and caused even more deaths.

And social tensions have boiled up over the slow distribution of aid.

Add a history of political instability and previous accusations of fraud by losing candidates and it is easy to see why many fear the new vote will not been seen as legitimate if it is held now.

The hurricane hit days before presidential, parliamentary and some local elections were due to take place on October 9, a partial re-run of a vote originally held a year earlier that was denounced by political leaders for fraud.

Critics say it will be impossible to do everything needed to hold an election in a little over two weeks time, but interim President Jocelerme Privert is under opposition pressure to hold the vote quickly to dispel suspicions that he might be trying to hang onto office illegitimately.

His government also wants to restart classes by evacuating some 140,000 people out of schools being used as shelters.

UN officials said evacuations would likely take longer than the government or residents would like, as a plan on how to move people is still being finalised.

“Obviously these people have suffered a lot by being in the hurricane and we don’t want them to suffer more by being pushed out,” said John Ging, a director at the UN Office for the Coordination of Humanitarian Affairs.

While Haiti’s capital of Port-au-Prince is plastered with sun-bleached posters of various candidates, the town of Jeremie in the hard-hit Grand Anse department of Haiti was virtually empty of political messaging on the first day of the campaign.

Sitting in front of her home, where portions of the roof were missing and some of the walls no longer there, Amelia Michel, 81, said her usual polling center had been damaged in the storm.

The president’s office says it will repair 240 such centers, and others could be rebuilt. Michel said she had seen government workers visit her polling center but no work seemed to have been done yet.

Michel said she was sleeping at a shelter set up at a nearby school and still had trouble finding access to food and water.

The elections were the last thing on her mind.

“We don’t think anything of them," she said. “We don’t have anything to eat,” she said as about a hundred people stood in a line snaking around a central square, waiting for food distribution from a World Food Program truck.