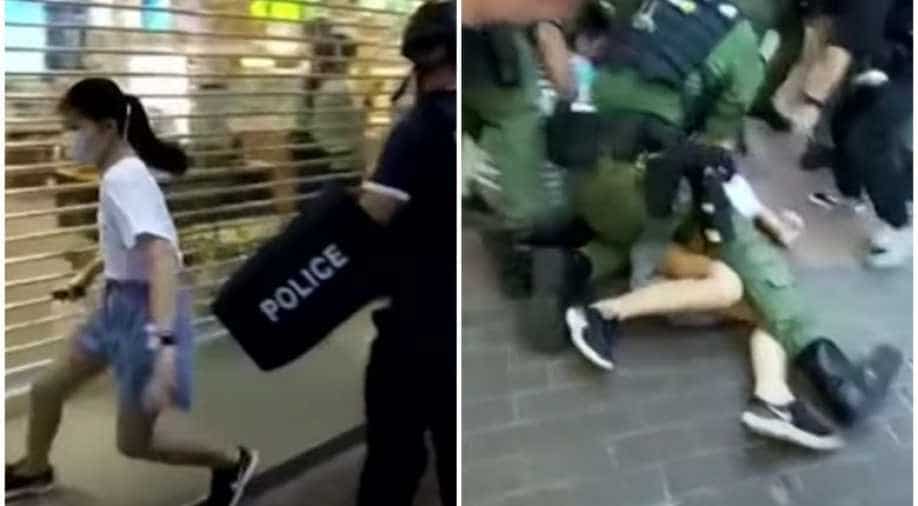 Viral video footage showed riot police rounding up a group of people in Mong Kok, including the girl. Photograph:( Twitter )

The girl, who is only being identified as Pamela, said she was out buying art supplies with her brother Sunday afternoon when she got caught in the protest crowds in the Mong Kok area.

A 12-year-old girl was pinned to the ground in Hong Kong by police officers in riot gear during pro-democracy protests that led to hundreds of arrests.

Her detention was caught on video and is being held up as evidence to show the unnecessary force used by the police. The video is creating massive outrage around the world.

The girl, who is only being identified as Pamela, said she was out buying art supplies with her brother Sunday afternoon when she got caught in the protest crowds in the Mong Kok area.

Although the young girl was not among nearly 300 people arrested that day, images of her being restrained on the streets of Mong Kok angered advocates for women’s and children’s rights.

Footage shows two cops approaching her and telling her to stand still before she takes off away from them.

Police in Hong Kong have come under heavy criticism after a widely circulated video showed officers tackling a 12-year-old girl to the ground during a pro-democracy protest. @MollyGambhir brings you the story pic.twitter.com/U9746adUc2

One of the cops tackles her to the ground, while several others work to pin her down, video shows.

However, Police said that the girl was attempting to flee during a stop-and-search action on Sunday in Mong Kok and they had used the “minimum necessary force” in subduing her.

The police issued penalty ticket to Pamela, her elder brother and a passer-by, accusing them of violating the Covid-19 ban on group gatherings of more than two people.