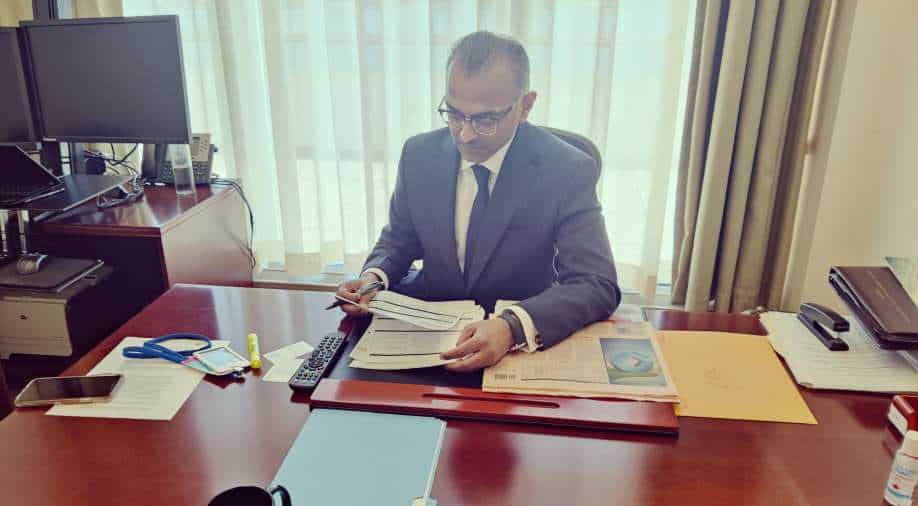 Nagaraj Naidu, Chef de Cabinet of the President of the 76th session of the United Nations General Assembly Photograph:( WION )

Speaking to WION’s diplomatic correspondent Sidhant Sibal in New York, Naidu said, “We are here to be seized of issues erupting all over the world. We have to take care of member states’ concerns and specific areas.”

This is the first time that an Indian diplomat is helming the post. He will be holding the position for a period of one year.

The position is akin to the principal secretary, a top bureaucrat, serving to the prime minister in the Indian political system.

Naidu explained the work as, “A train that is running nonstop and we are at the 76th station and we just dropped at the 77th station, that is the work.”

The 77th session of the UNGA will begin next year in September.

WION: What is your daily routine and how is the workflow?

Nagraj Naidu: The 76th session of the General Assembly kicked off recently, with only two more days to end. We just finished the high-level debate week, which is ending today. The work in the general assembly is such that we oversee all six committees. The work in those committees revolves around all the important initiatives and the pressing matters, which the President of the UNGA feels that needs to bring to the attention of the UN members. These can be issues such as climate change, Covid 19 vaccination and the inequity in distribution as we are seeing today, and all other issues that the member states think that needs to be deliberated upon in the general assembly. The office works for almost 24/7. We operate at every hour to enable virtual meetings to take place at any part of the day. Considering the time zones, we practically schedule meetings all the time. And, the PGA (president of the general assembly) has to be present in all the meetings, as there is massive coordination involved related to writing speeches, appointing co-facilitators, scheduling events and the plenaries throughout the year. It is like a train that is running non-stop, and we were at the 76th station, and we have just dropped at the 77th station, that is how hectic the work is.

WION: You are the first Indian diplomat to hold office. What are your thoughts?

Nagraj Naidu: It’s a privilege for India and I am delighted that I was chosen. It reflects the confidence of the PGA on what India brings to the table. The post of chef de cabinet is an important one, there is a lot of responsibility, and it requires to be in touch with all the UN member states. Handling the office brings its complexities, it is tremendously satisfying because once you are here, you manage all the processes. There is pressure from all the member states, which is good, and it also ensures that the president’s office works for the member states interests. Our work revolves around six different committees of the UN. The first committee is related to disarmament, the second committee deals with economic and social affairs, the third committee looks at the human rights issues, the fourth committee discusses the decolonisation issue, the five committees discusses the UN’s budget, like: What are the resources available for us, and how we can spread those resources to areas which are important to member states. And finally, the 6th committee looks after the legal issues. So, it’s an elaborate agenda and my responsibility as the chef de cabinet is that we run the agenda smoothly. The discussion happens in a very constructive atmosphere and it is deliberated upon. We bring the resolution and decisions of the general assembly to the broader UN membership.

WION: So, one has to put a lot of effort and diplomatic outreach, while also communicating with a lot of people.

Nagraj Naidu: Absolutely, you are firefighting from day one. It is the responsibility of the office to be ready at all times because we are here to handle the crisis situation. The PGA has to deliberate some of these issues and bring in his perspective that can reassure the member states that the important issues are getting the concerned attention and they are also getting resolved. The way we chart our calendar for the year is to seek what are these mandated events the president has to organise throughout the year. And then we work with a large number of teams to discuss requests made by the member states to the PGA. He delivers through the year. This is a massive exercise, and we have a very good team in place. We have a lot of guidance from PGA himself and we are looking at a very substantive and productive 76th session.