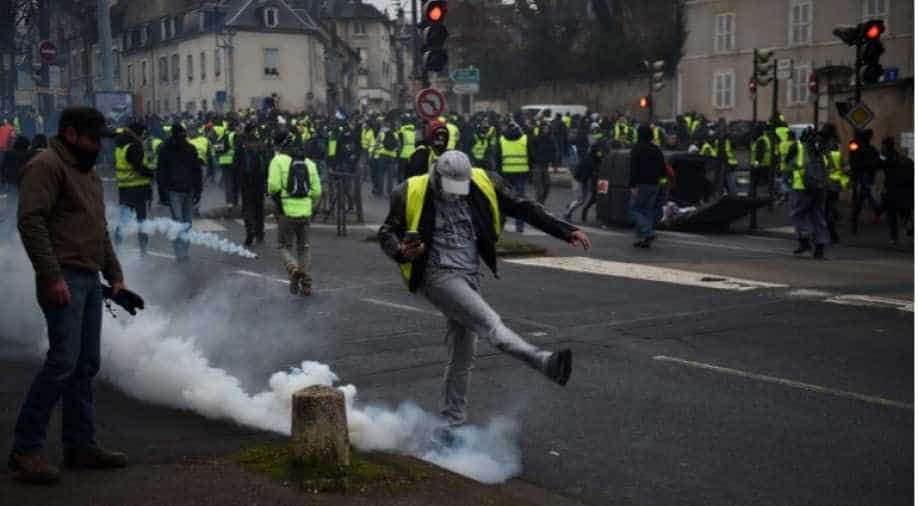 Large numbers of riot police patrolled the streets of the city, firing tear gas at protesters and arresting at least two

Around 200 "yellow vests" demonstrators protested in the western French city of Nantes on Saturday, for what the movement has dubbed "Act 13" of their weekly demonstrations that have shaken President Emmanuel Macron's authority.

Large numbers of riot police patrolled the streets of the city, firing tear gas at protesters and arresting at least two.

The Interior Ministry put the total number of protesters around France at 12,000, including 4,000 in Paris. A police source, however, said numbers were higher, with 21,000 demonstrators taking part in rallies outside Paris.

The "yellow vest" demonstrators, named for high-visibility car jackets, began in mid-November over fuel taxes then broadened into a more general revolt against a political class they view as out of touch with common people.

Around 200 "yellow vest" protesters from southern France tried to cross the border to Italy on Saturday to meet with Italians who they said shared their grievances.

Police blocked the group, led by Maxime Nicolle, who took part in a joint demonstration of French and Italian protesters in Sanremo on Friday.

The "yellow vests" said the diplomatic spat between Italy and France meant nothing to them.

France has recalled its ambassador in Rome on Thursday after what Paris described as baseless and repeated attacks from Italy's political leaders in past months, and urged Italy to return to a more friendly stance.

Deputy Prime Minister Luigi Di Maio, who also leads the populist, anti-establishment 5-Star party, said he had stopped over in France on Tuesday and met "yellow vests" leader Christophe Chalencon and candidates on the grassroots movement's list for European Parliament elections in May.

Nicolle slammed De Maio's meeting, saying many "yellow vests" opposed a list for the European elections. He added that Saturday's attempted visit to Italy was meant to explain to the Italian people their demands for better purchasing power and more participative democracy.