Europe grapples with 'third wave' amid surge in coronavirus cases 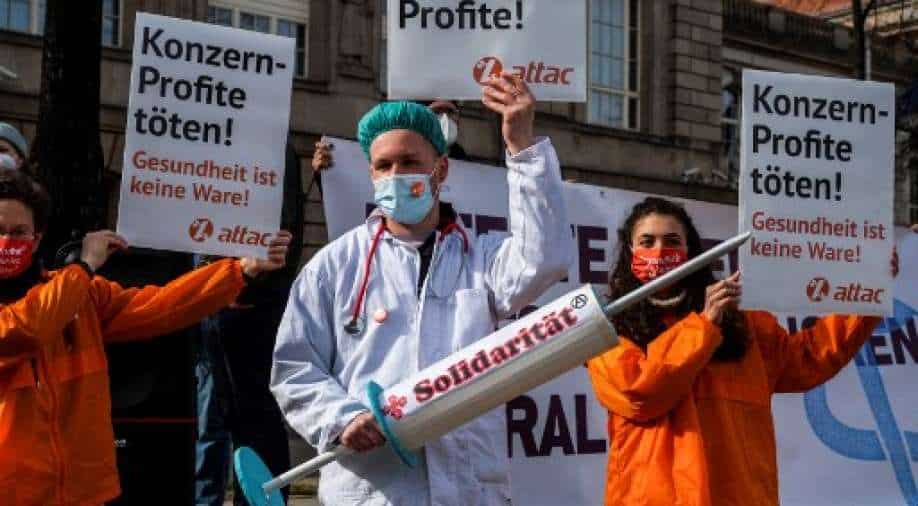 An activist displays mock syringe inscribed with the word "Solidarity" during a demonstration in front of the Economy ministry in Berlin Photograph:( AFP )

The Italian government aims to vaccinate at least 80 per cent of its population by the end of September with 1.95 million Italians been administered two jabs of the vaccine so far.

Italy's PM Mario Draghi warned of a "new wave" of coronavirus infections as schools, restaurants and shops were ordered to be shut.

The country which was the worst-hit country due to the virus in the initial months of the outbreak last year has been struggling once again with the rapid spread of coronavirus cases.

"More than a year after the start of the health emergency, we are unfortunately facing a new wave of infections," PM Draghi said, adding, "The memory of what happened last spring is vivid, and we will do everything to prevent it from happening again."

There have been 102,145 fatalities due to the virus in Italy with over 3.2 million cases so far although the country had begun its vaccination campaign in December but it has been hampered by lack of doses.

The Italian government aims to vaccinate at least 80 per cent of its population by the end of September with 1.95 million Italians been administered two jabs of the vaccine so far.

The EU has been struggling with a disappointing vaccination rollout that started in January as Germany's health minister Jens Spahn said the country ould have to wait until mid-to-late April for the newly approved Johnson & Johnson coronavirus vaccine.

Germany's disease control agency had warned earlier that a third wave of the pandemic had begun in the country even as the country had begun gradually easing partial lockdown from late February.

Spain which was also one of the countries to be hit badly due to the virus during the lockdown last March recorded 70,000 total coronavirus cases amid the third wave of the virus.

The country's health ministry had informed last week that  446 people died in 24 hours last Tuesday with 10,528 fatalities in February alone. The number of coronavirus cases in Spain has reached over 3.1 million.