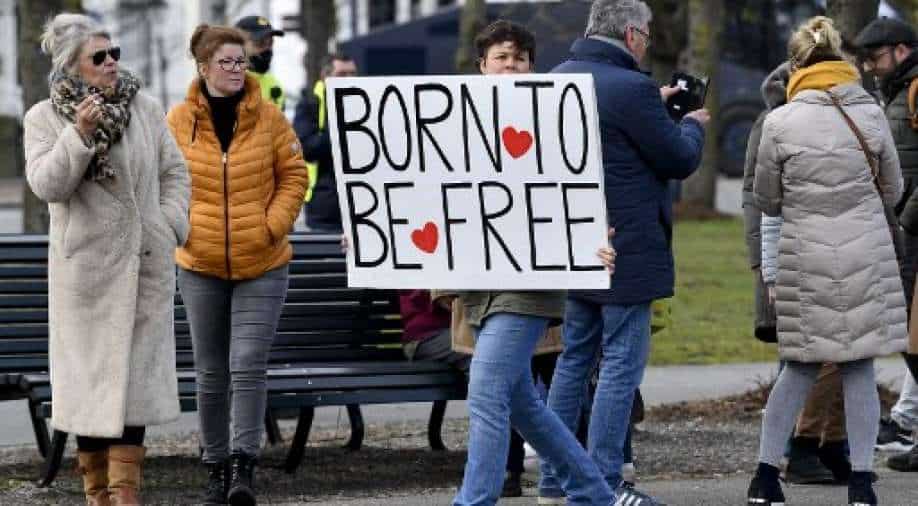 A woman holds up a sign during a demonstration against the government and anti-covid measures at the Malieveld in The Hague  Photograph:( AFP )

A day ahead of the general elections, violent clashes broke out in the Dutch city of Hague of Sunday as police fired water cannons at anti-curfew demonstrations.

Authorities used batons to disperse the crowd of anti-lockdown protesters gathered at a city park. The demonstration was broken up after the protesters flouted social distancing rules and ignored repeated police warnings to disperse.

Riot police with shields, batons and dogs moved in after some of the protesters refused to leave. A warning shot was also fired at one point after protesters kicked a police dog and threatened its handler.

According to reports, several protesters have been arrested for breaching COVID-19 protocols and violating public order. The Netherlands has been under tough lockdown since late January, with gatherings of more than two people prohibited to stem the virus outbreak with restaurants and bars shut.

The country imposed night-time curfew for the first since World War-II amid the pandemic leading to large scale protests. Train services to Hague were also halted to prevent more protesters from making their way to the city as the Netherlands begins three-day voting from today.

Polling has been spaced over three days to ensure social distancing and allow COVID-19 vulnerable people a chance to vote early. The election will give a verdict on Rutte's handling of the coronavirus pandemic.