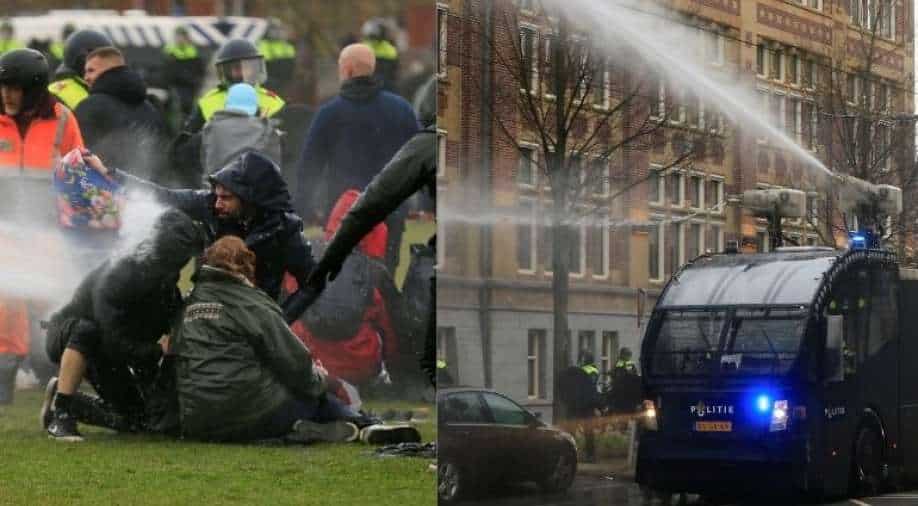 Riot police had clashed with demonstrators in Amsterdam and Rotterdam as protesters smashed shop windows even as the police deployed water cannon.

The Netherlands witnessed the third day of rioting over coronavirus curfew as the government said it will not back down to rioters.

Protesters in Geleen town came out on the streets against strict night-time curfew amid the lockdown as clashes erupted with police. The demonstrators had earlier attacked police over the weekend.

The curfew was imposed after the National Institute for Health (RIVM) warned about a new wave of infections due to the "British variant" of COVID-19 as 4,129 new COVID-19 cases were reported on Monday.

Finance minister Wopke Hoekstra said that those responsible for the riots were not legitimate protesters. Netherlands Prime Minister Mark Rutte had called the riots "unacceptable" as protesters rampaged through cities on Monday.

Riot police had clashed with demonstrators in Amsterdam and Rotterdam as protesters smashed shop windows even as the police deployed water cannon.

The riots spread to several cities including Amersfoort, The Hague and Den Bosch. Reports said police had arrested around 250 people after using water cannon and tear gas during demonstrations in Amsterdam, Eindhoven and other towns.

The country has witnessed the first curfew since World War II which took effect late on Saturday. The curfew has been set for  9 pm to 4:30 am and is set to last until at least February 10.