The earthquake hit at a depth of 10 kilometres in the sea around 2 pm, 125 kilometres northwest of Lucea, Jamaica.

A major earthquake of 7.7 magnitude struck the Caribbean region between Jamaica and Cuba, triggering a brief tsunami alert and sending hundreds of people pouring onto the streets of Havana on Tuesday.

The earthquake hit at a depth of 10 kilometres in the sea around 2 pm, 125 kilometres northwest of Lucea, Jamaica according to the United States Geological Survey.

It estimated there was a low likelihood of casualties or damage, and there were no immediate reports of either.

Hours later, a 6.1 magnitude aftershock hit off the coast of the Cayman Islands, part of a cluster of more than a dozen aftershocks which were mainly in the four-to-five magnitude range and lasted well into the evening, the USGS said. 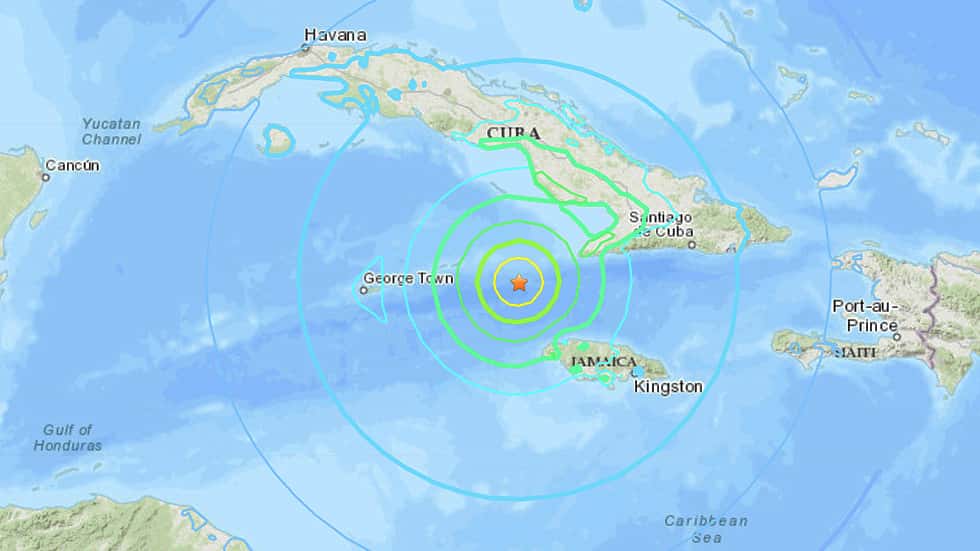 The US Pacific Tsunami Warning Center initially issued a warning that there was a threat of tsunami waves reaching 0.3 to 1 meter above tide level for the coasts of Jamaica, Belize, Cuba, Honduras, Mexico and the Cayman Islands.

But it lifted the alert update about two hours later.

The threat of a tsunami wave had largely passed but minor sea-level fluctuations up to 1 foot were still possible, it said afterwards.

The impact of quakes was hard to predict but the fact that it happened at sea level appeared to have helped,'' according to Don Blakeman, a geophysicist at the National Earthquake Information Center.

"The good news is really that it waved out into the ocean, it would have been a much different story if it had been right in Kingston," he added.

The earthquake was felt in several provinces including Guantanamo and Santiago de Cuba in the east, Cienfuegos in the centre and Havana in the northwest, the official Cubadebate website reported.

But there were no preliminary reports of damage or injuries.

In Miami, police said  buildings were being evacuated as a precaution after reports of tremors being felt in some areas of the city.