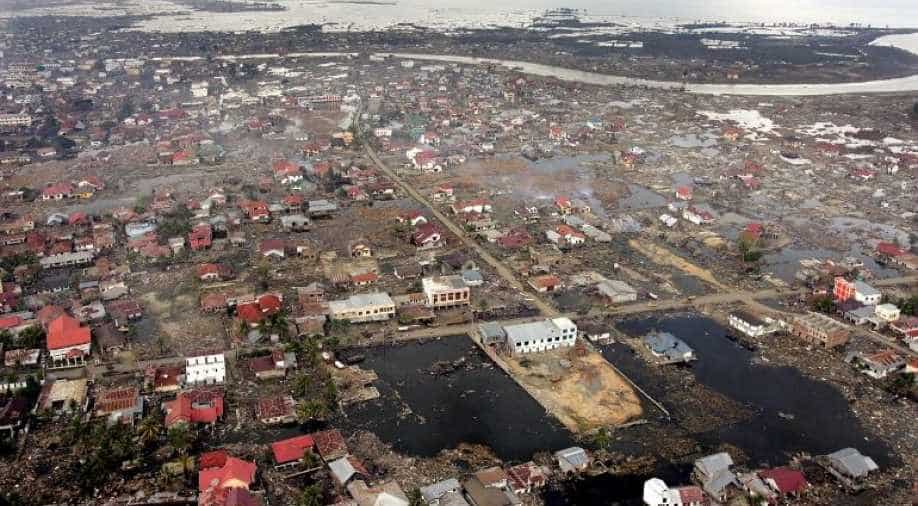 File photo: An aerial view shows the tsunami-devastated city of Banda Aceh on the Indonesian island of Sumatra on January 28, 2005. Photograph:( Reuters )

The December 26, 2004, tsunami was triggered by a magnitude-9.1 earthquake — the region's most powerful in 40 years — that tore open the seabed off Indonesia's Sumatran coast.

Communities across Asia commemorated the more than 230,000 victims of the Indian Ocean tsunami on Thursday, the 15th anniversary of one of the world's most deadly disasters.

On the morning after Christmas Day in 2004, a 9.1 magnitude quake off northern Sumatra island triggered a tsunami with waves as high as 17.4 meters (57 feet) that swept over vulnerable coastal areas of Indonesia, Sri Lanka, India, Thailand and nine other countries.

"It still haunts me. I can remember it all the time," said Suwannee Maliwan, 28, who lost both parents and five other relatives when the tsunami hit the Thai province of Phang Nga.

"Sometimes I dream that a wave is coming. I'm still scared," she said. "Sometimes I want to move somewhere else, but it's not possible because I was born here, my mom and dad passed away here." 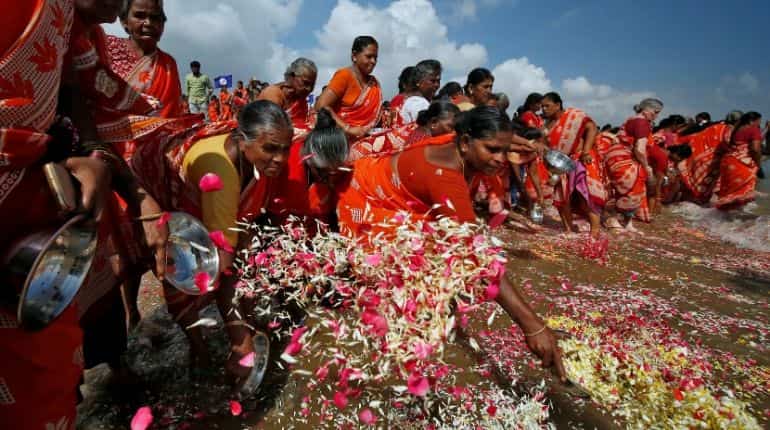 Women scatter flower petals in the waters of the Bay of Bengal during a prayer ceremony for the victims of the 2004 tsunami on the 15th anniversary of the disaster, at Marina beach in Chennai, India, December 26, 2019. (Reuters Photo)

Memorials were scheduled in the Indonesian province of Aceh, where entire villages were flattened and more than 125,000 people perished in the giant waves. Since then, the area has been largely rebuilt, with some 25,600 residential, commercial, government and school buildings constructed inside a high-risk zone, that had suffered virtually total devastation in 2004.

In Thailand, where more than 5,300 people were killed, including tourists visiting resort islands in the Andaman Sea, officials held a memorial ceremony and called for more awareness and preparedness for disasters.

"The government wants to lift safety standards and build awareness across all sectors in preparing and protecting people against disasters," Deputy Interior Minister, Nipon Bunyamanee, said at an opening ceremony. He said December 26 had been designated national accident prevention day.

Officials later laid wreaths at a memorial centre in Phang Nga province to pay tribute to King Maha Vajiralongkorn's nephew, Bhumi Jensen, who was last seen jet-skiing off the coast when the tsunami hit.

An interfaith service for Muslim, Christian and Buddhist victims was also scheduled.

Survivors from Ban Nam Khem, the worst-hit Thai village, will hold a candlelight vigil in the evening. At least 1,400 people were killed when waves struck the fishing village.