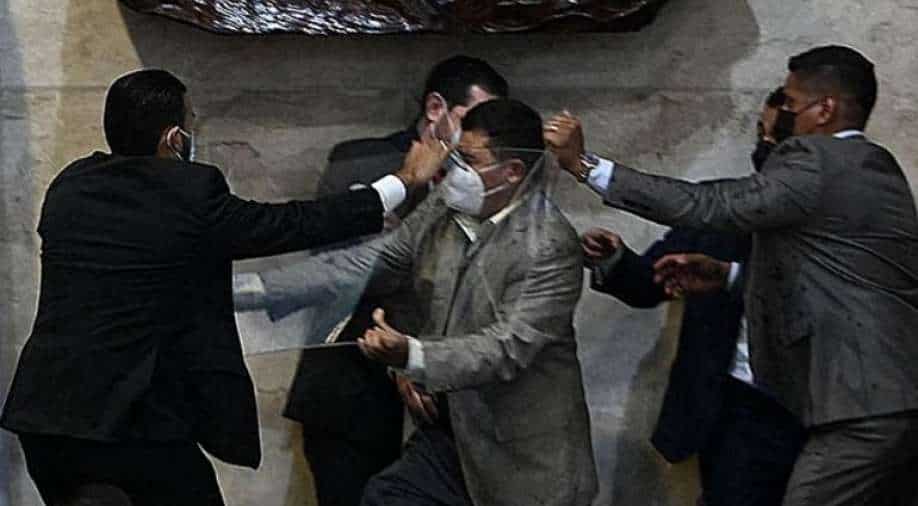 Deputy for the Libertad y Refundacion (LIBRE) party Rassel Tome hits deputy Jorge Calix after his election as President of the Provisional Board of Directors of the National Congress, at the Legislative headquarters in Tegucigalpa, on Friday. Photograph:( AFP )

A dispute among members of president-elect Xiomara Castro's party in the Honduran Congress turned violent on Friday. Several lawmakers took to fighting to put their point forward.

This comes as 20 rebel members proposed Jorge Calix, who was one of their cohorts, as provisional Congress president. On this, the legislators from her leftist Libre party protested.

The loyalists of Castro claimed it to be a violation of the pact with coalition partner of Libre.

Also Read: Unruly passengers force US plane bound for Tel Aviv to turn around mid-flight. What triggered it?

When Calix was being sworn in, angry Libre legislators forced their way to the podium amid cries of "traitors" and "Xiomara!". This forced him to flee under a flurry of punches, pushing and shoving.

Since election in November 2021, it was the first sitting of the 128-member Congress.

The crisis began on Thursday when Castro called 50 legislators of her party for a meeting to ask them to support Luis Redondo of the Salvador party of Honduras (PSH) as Congress president.

Also Read: Stray bullet causes havoc in US, claims life of UK traveller lying in bed. Find out what happened

The 20 rebel members did not attend the meeting.

Libre leader Gilberto Rios told AFP on Friday that the 20 are backed by groups that wish to stop Castro's promised anti-corruption campaign, including people in "organised crime" and "drug trafficking."