Dancing in the streets, and a parking lot, for Joe Biden 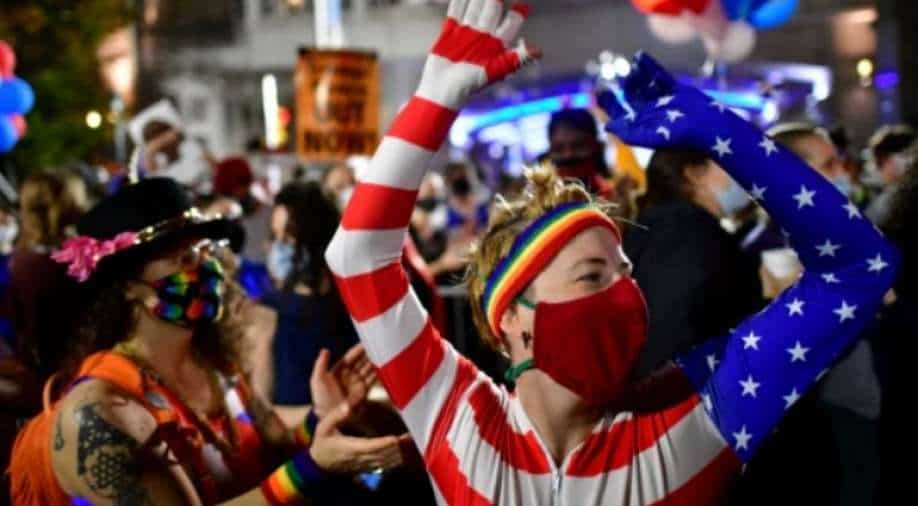 People have not historically hustled to spontaneous outdoor dance parties for Joe Biden.

They have not clanged spoons against frying pans in celebration for him, formed triumphant honk-parades along Fifth Avenue for him, made Champagne toasts with strangers in his honor through chants and tears.

But then, it seems that defeating President Donald Trump can do strange things for a man’s reputation.

In Biden’s first hours as president-elect Saturday, many voters who have appraised him through the decades as a particular kind of capital veteran — prone to perpetual windiness, requests for a “point of personal privilege” in casual conversation and digressions about dead senators — appeared ready to greet him as a sort of conquering hero.

“Winners write history,” said Amanda Litman, a former aide to Hillary Clinton’s 2016 campaign and the executive director of Run for Something, a group encouraging Democrats to seek local office. “I think he definitely gets bonus points for doing what no one thought was possible, even when we hoped it was.”

Litman said she had spent the day walking miles across Brooklyn, sobbing in the street and encountering an intersection dance-a-thon, set to “Shout” by the Isley Brothers, that felt airlifted from a wedding reception.

Biden, of course, has not generally been Washington’s leading purveyor of cool. That will not necessarily change over the long term. It is likely that gushing Democratic affection would have awaited anyone who managed to beat Trump.

And yet, this is the person who did it.

If the last two commanders in chief have been phenomenon candidates who became phenomenon presidents, Biden would appear to be ending the trend, comfortable instead with the identity that helped elect him: the man to rein things in a bit, to lower the collective volume before the neighbors complain.

This is someone who does not drink, who does not smoke, who once scolded friends at his own bachelor party for growing too rowdy.

During the campaign, Biden’s team strained to create a mini-cult of personality around him, bragging on his signature accessory (aviators), his signature vice (ice cream), his interest in muscle cars.

“Ridin’ With Biden,” went one slogan that kinda-sorta caught on.

While most of the impromptu gatherings this weekend came in places unaccustomed to Biden-associated revelry — with rollicking bashes from Los Angeles to Washington to most any city in between, cheering Biden and his running mate, Kamala Harris — there was at least one ZIP code for which the embrace was more culmination than novelty.

On Saturday, hundreds of cars jammed into a parking lot outside an events center in Wilmington, Delaware, ferrying in Biden’s friends and fans from the state he represented for 36 years in the Senate for a somewhat socially distanced drive-in rally. They sat on the roofs of their vehicles and played cornhole as they waited. They lugged around oversize American flags and kibitzed in lawn chairs and balanced Champagne flutes on top of their cars. They were proud, they said, of their state’s most famous resident.

In his speech, Biden was quintessentially himself. After jogging onstage to a chorus of car honks, he began with a nod to the fine people of Delaware (“the people who brought me to the dance!”) and then decided to name a few, shouting out assorted local dignitaries like a city council candidate.

He quoted relatives and welcomed Harris and her husband to the Biden family, “like it or not.”

He tried to empathize with Trump voters, noting that he had “lost a couple times myself” in his political day. He acknowledged the present national gravity. He projected humility. He smiled a little.

It had been a long campaign — three, actually, for the presidency alone in his lifetime. He looked out on guests who had seen him lose as often as they’d seen him win.

This time around, the mood was purely festive — so much so that Maureen Whilby had decided to celebrate her 55th birthday on-site, where the fireworks and confetti blasts might as well have been for her, too.

“Best birthday in the world!” she said, several hours before the sky would light up with the words “Biden” and “president elect.” “Never forget this birthday. Unity. Bring us back together. No division.”

Nearby, a cluster of Delawareans stood together wearing T-shirts indicating their past lives as Iowa volunteers for Biden, a reminder of the dark, icy days he spent in a state that rejected him in his 2008 run and did so again in 2020.

“We were a little nervous at that point,” admitted Patti McKelvey, 53, a Pilates and yoga teacher from Wilmington. “But we were still 100% backing Joe.”

State Rep. Krista Griffith — “I’m Joe Biden’s state representative,” she noted — also made the trek to Iowa. This, she suggested, was more fun.

“We all know him,” she said Saturday. “We just can’t wait for the rest of the country to experience that.”