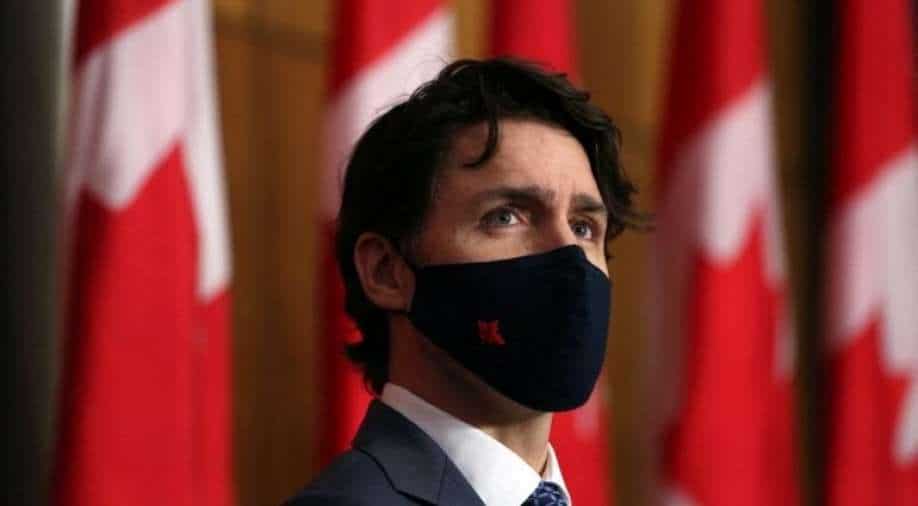 In this file photo taken on April 16, 2021 Canadian Prime Minister Justin Trudeau listens to a reporter's question during a news conference in Ottawa, Canada Photograph:( AFP )

Canada has surpassed the grim landmark of recording 25,000 deaths due to the novel coronavirus on Tuesday.

The unfortunate landmark comes after the country's death toll with the third wave of the pandemic waning in the country amid the ongoing vaccination drive.

Canada had recorded its first coronavirus death on March 9. Health authorities are increasingly positive of a return to a semblance of normalcy over the summer and into autumn after three-quarters of eligible Canadians are fully vaccinated.

According to Prime Minister Justin Trudeau, ''this summer once cases are low and at least 75 per cent of people have had one dose and 20% had a second, you can look forward to outdoor things.''

Approximately 55 per cent of its 37 million population had received at least one jab of the coronavirus vaccine, while 4 per cent have been completely inoculated.

Canada’s chief public health officer Dr Theresa Tam is also positive as she said Canada was ''making steady progress, with a 25 per cent decrease in reported active cases since the peak of the third wave in mid-April.''

However, she warned with regard to relaxation of restrictions: ''We’re not there yet, but I am really hopeful because of how fast some of the vaccines are going in the arms.''

More segments of the demographic in Canada are presently qualified for inoculations as the National Advisory Committee on Immunization or NACI has now suggested that the total two-jab regimen of the Pfizer-BioNTech vaccine can be given to those aged somewhere in the range of 12 and 18.

Health experts have additionally said that the individuals who got a punch of the AstraZeneca immunization as their first portion could have the choice of picking an alternate antibody for their second.

COVID-19: Scientists develop wall coating that can capture aerosols and droplets from air