Coronavirus: Taiwan, the only winning economy among Four Asian Tigers 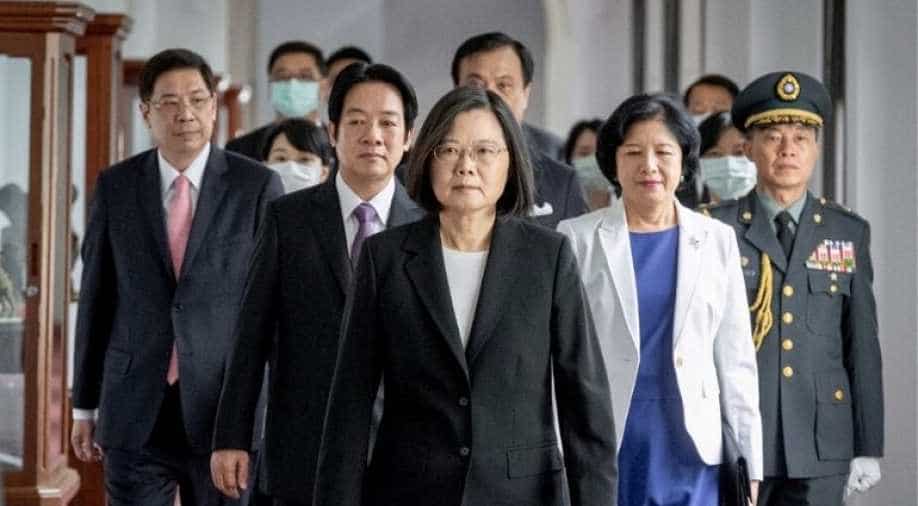 This handout picture taken and released on May 20, 2020 by the Taiwan Presidential office shows Taiwan's President Tsai Ing-wen (C) arriving at the Presidential Office for her inauguration ceremony in Taipei Photograph:( AFP )

As Taiwan GDP has moved up the other Asian economies like South Korea, Hong Kong and Singapore continued to face the worst ever economic slump in decades.

Taiwan's GDP growth was revised upward despite the pandemic and increasing tensions with China, leaving it as the only winner among the 4 Asian Tigers. As Taiwan GDP moved up the other Asian economies like South Korea, Hong Kong and Singapore continued to face the worst ever economic slump in decades.

What are the four Asian Tigers?

The Four Asian Tigers are the high-growth economies of Taiwan, Singapore, South Korea and Hong Kong. The Four Asian Tigers have habitually sustained high levels of economic growth since the 1960s and is included in the category of 35 most advanced economies of the International Monetary Fund. Singapore and Hong Kong have been the most distinguished global financial centres, while South Korea and Taiwan are essential hubs for the Global Manufacturing of automobile and electronic components, as well as information technology.

Let us have a look at the current situation of the Asian Tigers:

Taiwan seems to be the only winner among the 4 economies. Taiwan’s expected GDP can be revised upward for the first time thanks to the government’s “Triple Stimulus Vouchers” against the impact of the Wuhan coronavirus (COVID-19), a top Taiwanese think tank said Wednesday (July 22), reported Taiwan News.

The unprecedented revision saw the island’s economy grow by 1.77 per cent in 2020, compared to the 1.03 per cent the Chung-Hua Institution for Economic Research (CIER) predicted in April. The new figure released Wednesday was the first upward revision by a Taiwanese think tank since the outbreak of the pandemic, going against earlier international forecasts of negative growth. Taiwan is one of the few states that has successfully handled the Coronavirus Crisis with just 455 positive cases on the island. Out of 455 infections, Taiwan successfully treated 440 infections and recorded just 7 deaths to date. Taiwan is being seen as a success story globally in dealing with the deadly pandemic that has caused more than 15 million infections around the world and caused more than 623658 deaths.

The success of Taiwan is extraordinary in many senses. In a recent exclusive interview to WION, Taiwan's Acting Ambassador Jack CH Chen said, "China has used the [coronavirus] opportunity to expand its military presence in the South and East China Seas". Taiwan's top diplomat in India said that China continues to "intimidate" Taiwan amidst COVID pandemic and "dispatch military aircraft and vessels to circle Taiwan."

South Korea, the other 4 Asian Tigers plunged into a recession with its worst economic decline in exports by most since 1963. Asia's fourth-largest economy shrank by a seasonally adjusted 3.3% in the June quarter from three months earlier, the Bank of Korea said on Thursday. That is the sharpest contraction since the first quarter of 1998 as per news agency Reuters.

South Korea was the next country to slide into recession after Singapore. Singapore's trade-reliant economy plunged into a recession with its GDP plummeting 41% in the second quarter. The contraction was worse than economists' expectations for a 37.4% decline in the quarter when Singapore was under lockdown to curb the spread of the virus.

The once-in-a-century pandemic has so far infected over 13 million people worldwide and killed nearly 573,000. Singapore has reported 46,283 coronavirus cases with 26 deaths as of Monday. The government expects full-year GDP to contract in the range of -7% to -4%, the biggest downturn in its history. Citi analysts see an 8.5% contraction and expect another downgrade to official forecasts next month when final GDP data is released, according to news agency Reuters.

Hong Kong, on the other hand, had its unemployment rate risen to 6.2 per cent, which is the highest in more than 15 years. Hong Kong has been able to effectively control the spread of the virus is now struggling with the 'Third Wave' of virus spread. Hong Kong on Wednesday recorded the highest single-day spike of 102 Coronavirus cases. According to the data released by the city's health department, of the additional local cases, more than half were unlined to previous cases. According to Labour Chief, Law Chi-Kwong, “the still serious [pandemic] situations in certain parts of the world, and renewed surge in local cases lately serve as a timely reminder that the economic outlook is still subject to huge uncertainties.”

The city entered an economic recession last year, after months of anti-government protests sparked by the now-withdrawn extradition bill

The local economy was dealt another blow when the coronavirus broke out in Hong Kong in late January. In the first quarter alone, Hong Kong’s economy suffered its worst decline on record, contracting 8.9 per cent year on year.

And now with China's National Security Law that has attracted Global Criticism and sanctions from the U.S. in place, the economy is believed to get worse, making it a lot more difficult for Hong Kong to recover.