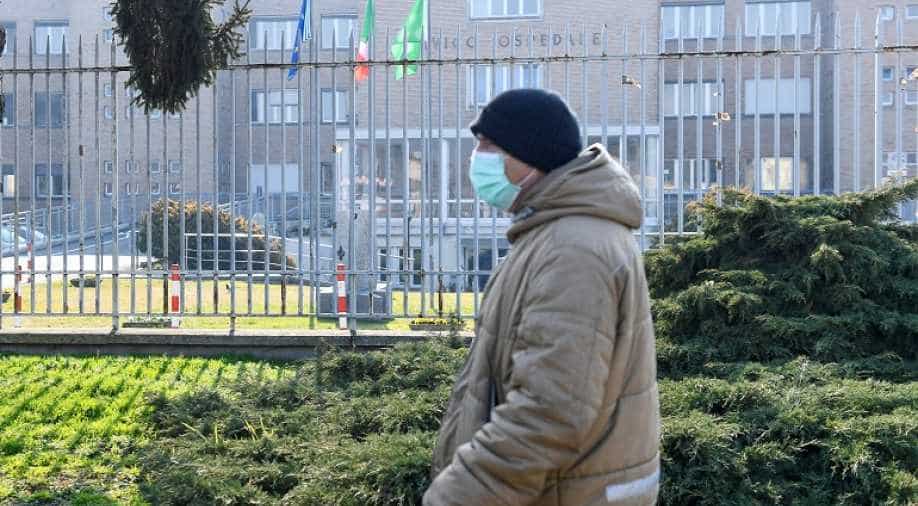 A man wearing a mask walks past a hospital amid a coronavirus outbreak.  Photograph:( Reuters )

Authorities in the two regions, where the outbreak is concentrated, have cancelled sports events, including three top league soccer games, and closed schools and universities. Companies from Ray-Ban owner Luxottica to the country's top bank UniCredit have told workers living in the affected areas to stay home.

Deadly Coronavirus has claimed two lives in Italy in less than 24 hours with almost 79 cases reported in the European nation.

A dozen towns have been put under virtual lockdown with massive travel restrictions in place.

Shops, offices and community centres were deserted in Codogno in Lombardy region where the 2 deaths occurred. Lombardy and Veneto represent Italy's industrial heart and jointly account for 30% of gross domestic output.

"I've wondered myself why so many cases in Italy ... and the answer is in the rigorous and meticulous controls our country has adopted from the start," Prime Minister Giuseppe Conte said at a late-night press conference.

Italy's first victim was a 76-year-old woman who was found dead at her home 50 km (30 miles) south of Milan on Thursday and tested positive for the coronavirus.

A 78-year-old man died of the infection in a hospital near Padua on Friday night.