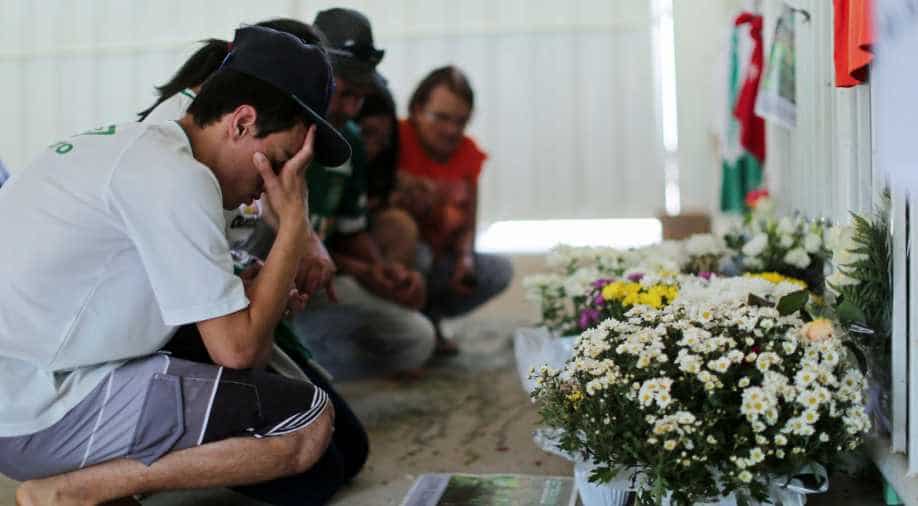 Only six people survived in a disaster that killed 71, including most of a Brazilian soccer team and 20 journalists. Photograph:( Getty )

The pilot of the Colombian plane that crashed and killed 71 people on Monday had radioed to report that the plane was running out of fuel, according to a recording aired on Wednesday by Colombian media.

The pilot had asked for permission to land due to a "fuel emergency".

The request was granted by the control tower at Medellin's international airport. But the tower then lost contact with the plane, whose fuselage was found plastered on a hillside 50 kilometers (30 miles) outside the city, news agency AFP reorted.

Authrities have not confirmed the authenticity of the recording played by Colombian broadcasters.

Only six people, including a journalist and two crew members, survived the air disaster that killed most of a Brazilian soccer team and twenty journalists. Only three of the Chapecoense soccer squad en route to the biggest game in their history survived.

The pilot of an Aviance plane flying near by confirmed he had overheard the LAMIA plane reporting an emergency.

"Mayday mayday ... Help us get to the runway ... Help, help," Juan Sebastian Upegui described the LAMIA pilot as saying in an audio message also played by local media, reuters reported. "Then it ended ... We all started to cry."

The recordings could be used in investigations and the Aviance plane pilot called as a witness, said Alfredo Bocanegra, head of the civil aviation authority.

The BAe 146, made by BAE Systems Plc, slammed into a mountainside, Reuters reported.

One survivor, Bolivian flight technician Erwin Tumiri, said he only saved himself by strict adherence to security procedure, while others panicked.

"Many passengers got up from their seats and started yelling," he told Colombia's Radio Caracol. "I put the bag between my legs and went into the foetal position as recommended."

Another survivor, Bolivian flight attendant Ximena Suarez, said the plane slammed into the mountain less than a minute after the lights went out.

Of the players, goalkeeper Jackson Follmann was recovering from the amputation of his right leg, doctors said.

Journalist Rafael Valmorbida was in intensive care for multiple rib fractures that partly collapsed a lung.

Investigations into the two black boxes from the crash site near the town of La union are on going.

The plane "came over my house, but there was no noise," said Nancy Munoz, 35, Reuters reported. "The engine must have gone."

All the bodies have been recovered, of which forty-five have been identified.

Since there was no fire on board, bodies are being identified by fingerprints, Julio Bitelli, Brazil's ambassador to Colombia, told Reuters.

"There's no need for family members to come," Bitelli said. "If they want to come, that's an individual decision that we respect, and we will give all the support needed."

The bodies will be sent to Brazil and Bolivia. All of the crew members were Bolivian.

The Colombian team wants the trophy to be given to Chapecoense in honour of the dead.

"As far as we are concerned," the team said, "Chapecoense will forever be the champions of the Copa Sudamericana Cup 2016."