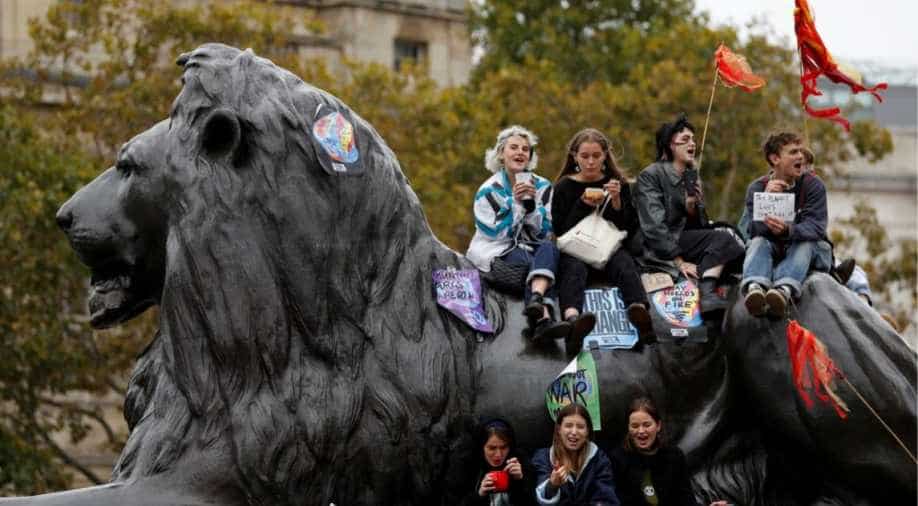 British environmental campaigners expressed regret Thursday and promised to change their ways after one of their protests caused a near-riot on the London underground.

The Extinction Rebellion pressure group has been staging 10 days of colourful but disruptive action across London and other global cities to draw attention to climate change.

The British Transport Police said it had arrested eight people and was also "reviewing the unacceptable violent clashes" that erupted at the Canning Town underground stop.

A clip that went viral on Twitter showed furious Londoners tossing their morning snacks and cups at an activist who had climbed atop a train at the east London station.

He was then shown being dragged to the ground by his feet before scuffles broke out.

Video journalist Elliot Laughlin told the BBC that he was also attacked while trying to film the incident from the back of the crowd.

"They said I was with them. I said I was here to film this action. Several individuals grabbed me and pulled me on the floor and about 20 Londoners beat me down," Laughlin said.

He said he remained "in a foetal position being kicked" before three Londoners jumped in and covered him to shield him from the blows.

A separate protest saw two priests climb atop a Docklands Light Railway (DLR) train and read an impromptu prayer vigil at the Shadwell stop just east of the City of London financial hub.

A third protest member glued himself to the train.

Service along both lines was halted during the morning commute. The disruptions sparked a social media backlash and drew angry headlines in the tabloid press.

Extinction Rebellion issued a carefully worded statement several hours later that did not explicitly apologise but did express regret.

"It is regretful that there was violence at today's action at Canning Town tube station. We would like to express our sadness that events escalated this way."

London police have reported making more than 1,600 arrests since activists first took to the streets at the start of last week.

The campaign has seen activists try to "occupy" London City Airport and other sites in and around the UK capital's two vibrant financial districts.

The group accuses big businesses and the government of inaction in the face of fast-rising global temperatures that scientists link to polluting carbon emissions.

But the rumbles of Londoners' discontent have been growing and police imposed a blanket ban on gatherings of more than two people at the start of the week.

Campaigners on Thursday were refused an urgent High Court hearing to challenge what they called an "unprecedented and disproportionate" ban.

Anger at the disruption appeared to reach boiling point with the Canning Town incident, prompting Extinction Rebellion to acknowledge the backlash and promise a change of tack.

"In light of today's events, Extinction Rebellion will be looking at ways to bring people together rather than create an unnecessary division," the group's statement said.

It also hinted at disagreements over tactics within its ranks.

"We are a broad and diverse movement with a wide range of views, and are aware that many people were not for this action," the statement said.

"Those that acted this morning planned their action autonomously, within Extinction Rebellion's principles and values."

The group briefly splintered when it refused to sanction an attempted drone attack on London's Heathrow Airport last month.