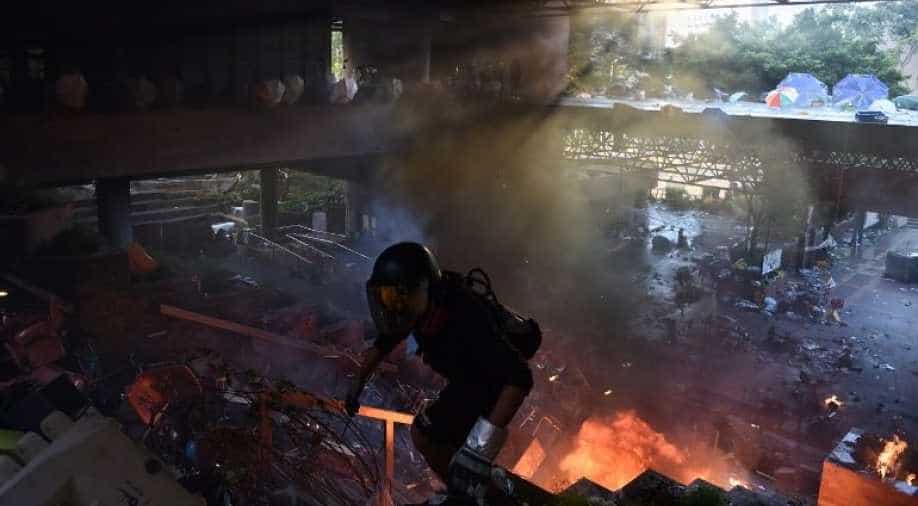 China on Wednesday slammed the United States after the US Senate passed the Hong Kong Human Rights and Democracy Act, envisioning support for local protesters, asserting that the bill translates into "overt meddling" in the country's domestic affairs.

"This bill neglects facts and the truth. It applies double standards and it is overt meddling in Hong Kong's affairs and China's internal affairs. This is a serious violation of the international law and fundamental norms regulating international relations. China condemns this and speaks out against this decisively," Foreign Ministry spokesman, Geng Shuang said in a statement.

His statement came hours after the Senate approved a separate bill banning the export of certain kinds of munition to the Hong Kong police and its own version of the act.

The Senate and the House of Representatives, which has approved its version, now have to settle differences, after which the legislation can be sent to President Donald Trump for consideration.

China is calling on the US to abolish such a policy toward Hong Kong "until it is too late" and to "immediately take measures to prevent the bill from becoming law", Geng said.

"China will be forced to take resolute countermeasures for protecting its national sovereignty, and its security and development interests," he added.

If signed into law, the Hong Kong Human Rights and Democracy Act will demand sanctions on Chinese and Hong Kong officials identified by the US government as carrying out alleged human rights abuses.

The US Senate unanimously adopted legislation Tuesday supporting "human rights and democracy" in Hong Kong and threatening to revoke its special economic status, signalling anger with Beijing about a crackdown on protests in the Chinese territory.

The lawmakers also approved a measure that would ban the sale of tear gas, rubber bullets and other equipment that has been used by security forces to suppress the protests that have rocked Hong Kong for months.

China had expressed its "strong indignation" last month when the US House of Representatives passed a similar measure.

Large-scale protests, triggered by a now-withdrawn controversial extradition bill, have been ongoing in Hong Kong since early June, with the police detaining nearly 4,500 people so far.

Over 1,500 people have been hospitalised after sustaining wounds in clashes and over 400 police officers have been injured.

Tensions have escalated over the past few days, with a violent standoff unfolding at the Hong Kong Polytechnic University.

Beijing has repeatedly stated that the situation in Hong Kong is a result of foreign interference in China's domestic affairs and expressed full support for the actions of the local authorities.

The Senate's Hong Kong Human Rights and Democracy Act would require the US president to annually review the favourable trade status that Washington grants to Hong Kong.