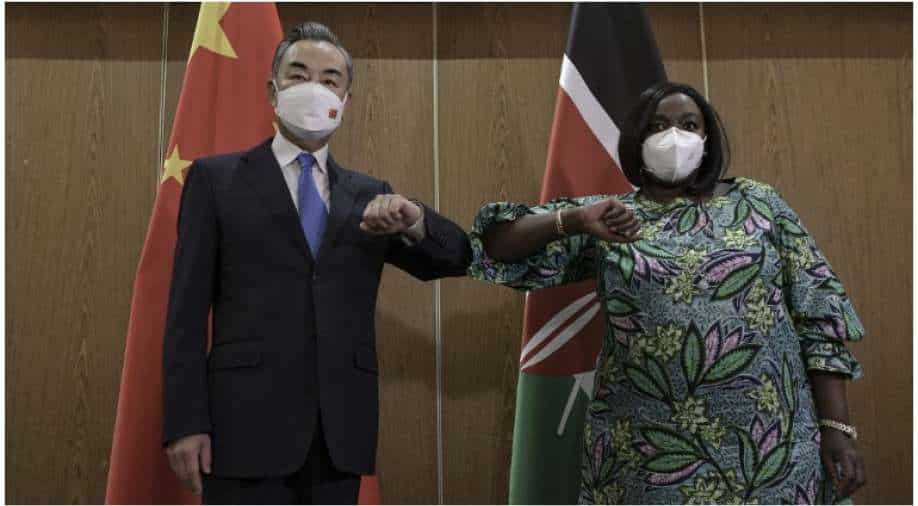 China's Foreign Minister Wang Yi (L) is received by his Kenyan counterpart, Raychelle Omamo (R) at the Sarova Whitesands Hotel where they met for a bilateral meeting between Kenyan and Chinese officials in the Kenyan coastal city of Mombasa on January 6, 2022. Photograph:( AFP )

Chinese Foreign MInster Wang Yi claimed in Kenya that Chinese loans to African nations were 'mutually benefiting'. He said that the loans were not a strategy to win diplomatic and commercial concessions

Chinese Foreign Minister Wang Yi on Thursday refuted claims that China was tarpping African nations in debt trap by lending huge amounts of loans. Yi said such claims was just a 'narrative' pushed by opponents. He was speaking in Mobasa, Kenya ahead of touring China-funded infrastructure projects in the country.

Wang Yi claimed that Chinese loans to African nations were 'mutually benefiting'. He said that the loans were not a strategy to win diplomatic and commercial concessions

Wang, speaking ahead of touring Beijing-funded infrastructure projects in Kenya, said China's considerable lending to Africa was "mutually benefiting" and not a strategy to extract diplomatic and commercial concessions.

"That is simply not a fact. It is speculation being played out by some with ulterior motives," he told reporters in the Kenyan port city of Mombasa.

"This is a narrative that has been created by those who do not want to see development in Africa. If there is any trap, it is about poverty and underdevelopment," he said, speaking through an interpreter.

Wang's three-nation tour of Eritrea, Kenya and the Comoros follows a trip to Africa by US Secretary of State Antony Blinken in November that in part aimed at countering China's growing influence on the continent.

China is Africa's largest trading partner, with direct trade worth over $200 billion (177 billion euros) in 2019, according to official Chinese figures.

China is Kenya's second-largest lender after the World Bank and has funded a number of costly infrastructure projects that have raised concerns about Nairobi taking on more debt than it can afford.

In Mombasa, Wang held a closed-door meeting with a team of government ministers and signed agreements on trade and investment, health, security, climate change and green technology transfer.

He later met President Uhuru Kenyatta and visited the Port of Mombasa, where China is constructing a new $353 million terminal to allow larger oil tankers to berth.

"The visit is a testament to the deepening of relations between the two countries," said Kenya's foreign minister, Raychelle Omamo.