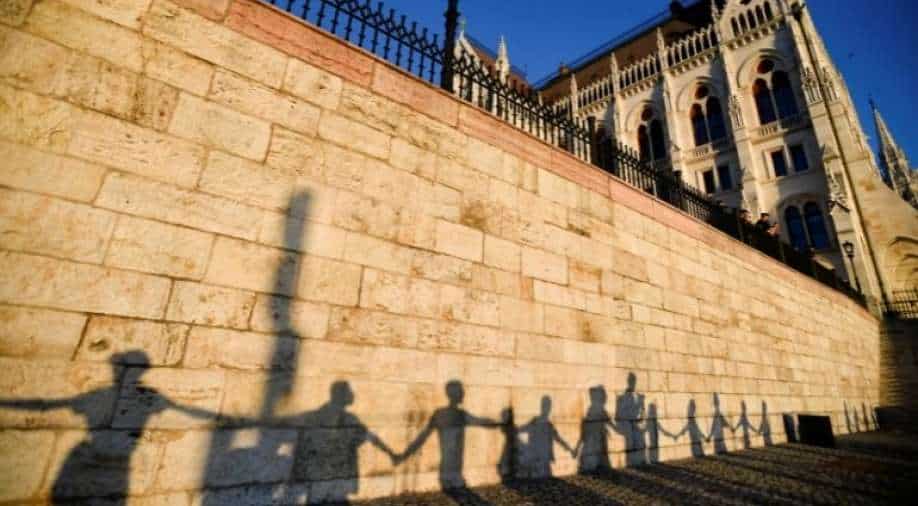 Silhouettes of demonstrators are seen as they march around the Hungarian parliament to protest against Hungarian Prime Minister Viktor Orban and the latest anti-LGBTQ law in Budapest, Hungary, June 14, 2021 (File Photo). Photograph:( Reuters )

The EU has criticised the law, passed on Tuesday, outlawing the dissemination in schools of content deemed to 'promote homosexuality and gender change'

Hungary's ban on school talks about sexuality or transgender issues is "an affront to human rights", Britain's first Special Envoy on LGBT Rights said on Thursday, saying he would join the European Union (EU) in fighting the new law.

The EU has criticised the law, passed on Tuesday, outlawing the dissemination in schools of content deemed to "promote homosexuality and gender change", with Equality Commissioner Helena Dalli raising the possibility of sanctions.

"This kind of law is obviously completely unacceptable," Nick Herbert, who was the first Conservative Party lawmaker to be openly gay when elected in 2005, told the Thomson Reuters Foundation in a video call.

"It's an affront to human rights (and) it's very concerning that European countries should be going backwards like this," said Herbert, who stood down from parliament in 2019.

European Commission President Ursula von der Leyen said on Wednesday that she was "very concerned" about the new law and was assessing whether it breached "relevant EU legislation".

Herbert, 58, said he could not speak for ministers as to whether Britain was considering sanctions, but said he intended to "look at any proposal" by the government in response to Hungary's move.

Hungary's nationalist Prime Minister Viktor Orban has grown increasingly radical on social policy ahead of an election next year, railing against LGBT+ people and immigrants.

"It's already been raised at a high level and we will continue to press this issue working with our allies," said Herbert, who previously served as a minister at the Home Office and Ministry of Justice.

"(Johnson) is clearly sending a signal of his own concern for these issues and the progress he wants to see," said Herbert, who was an outspoken advocate for same-sex marriage before it was legalised in Britain in 2013.

The government has faced criticism for a delay in banning so-called conversion therapy, which aims to change a person's sexual orientation or gender identity, and for not simplifying the procedure for changing gender on legal documents.

"It's true that the government decided not to proceed with self-certification for trans people, but we do want to make the process of transition easier," Herbert said.