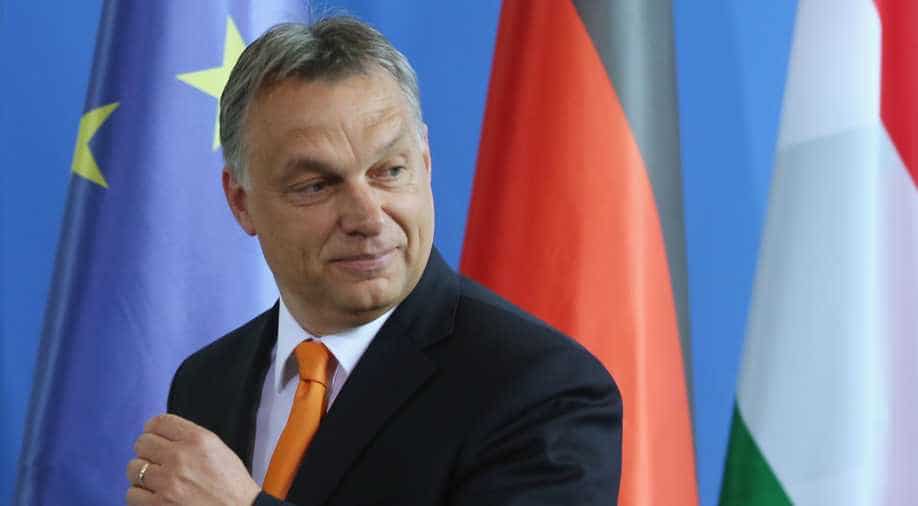 Last-minute changes to the bill, which was prompted by public outrage after a series of sex scandals involving governing party and government officials, included restrictions against showing or 'popularizing' homosexuality and content that promotes a gender that diverges from the one assigned at birth.

Hungary’s parliament voted Tuesday to adopt legislation that would increase sentences for sex crimes against children, but critics say the law is being used to target the country’s LGBT community before crunch elections for Prime Minister Viktor Orban next year.

Last-minute changes to the bill, which was prompted by public outrage after a series of sex scandals involving governing party and government officials, included restrictions against showing or “popularizing” homosexuality and content that promotes a gender that diverges from the one assigned at birth.

Orban’s critics say the changes were made to target the country’s LGBT community in an effort to rally support from his conservative base and shift the focus away from the failures of his administration before elections in 2022.

The new rules, unexpectedly added to the bill by government-aligned lawmakers last week, require the labeling of all content that might fall into that category of “not recommended for those under 18 years of age.” Such content would be restricted for media like television to the hours between 10 p.m. and 5 a.m. The restrictions extend to advertisements and even sexual education, which the law would restrict to teachers and organizations approved by the government. The bill would also create a public database of sex offenders.

Orban has increasingly presented himself as a protector of traditional Christian values, although that image has been undermined somewhat by the sex scandals involving officials and allies of his Fidesz party over the past few years.

Last year, a Hungarian diplomat in Peru was convicted of possession of child pornography and handed a $1,800 fine and a suspended prison sentence after being brought home and charged in Hungary. That case, which sparked the public pressure on the legislature to enact stricter sentencing for pedophilia crimes, was just one in a series of scandals that has undermined public faith in Orban’s government.

The last-minute additions to the legislation were criticized by human rights groups, including Foundation for Rainbow Families, which promotes legal equality for all Hungarian families with children.

“Fidesz does this to take the public conversation away from major happenings in the country,” said Krisztian Rozsa, a psychologist and board member with the foundation, citing corruption and the government’s responses to the pedophilia scandal and the coronavirus pandemic.

Content providers such as RTL Klub, Hungary’s largest commercial television station, and the Hungarian Advertising Association have come out against the new law, saying the rules restrict them from depicting the diversity of society.

Linking the LGBT community to pedophilia is a tactic that may score Orban and his party points with conservative rural voters, many of whom, spurred on by a steady stream of government propaganda, see the government as a bulwark against the cosmopolitan liberalism symbolized by opposition political figures in the capital.

Last year, the Fidesz-controlled parliament enacted legislation that effectively bars gay couples from adopting children in Hungary through a narrow definition of the family as having to include a man as the father and a woman as the mother.

Shaken by a bungled response to the coronavirus pandemic, a foreign policy pivot toward China and Russia that has angered his partners within the European Union, and increasing international isolation, Orban is facing a tough election campaign against a six-party opposition alliance.

Balint Ruff, a political strategist, said the move to target the LGBT community was a “cynical and evil trap.” He added: “It’s a method used in authoritarian regimes to turn their citizens against each other for their own political gain.”

It is not uncommon for someone who has spent their whole life in rural Hungary to have never met an openly gay person, Ruff said, adding that by inundating rural voters with conspiracies about gay propaganda taking over the world, Orban has found an effective tool for mobilizing voters.

“The theme of the campaign will be liberal homosexual Budapest versus the normal people,” he said.

By not supporting the new law, the opposition would be branded supporters of pedophilia for the duration of the campaign, Ruff said. But supporting the bill would betray more liberal voters who find linking pedophilia and the LGBT community deplorable.

For those whose families are directly impacted by such laws, the effects hit closer to home.

Rozsa, from the Foundation for Rainbow Families, said he was worried that bullying and exclusion among Hungarian teenagers would increase against those not seen as heterosexual — and also feared the implications of the governing party’s move for the children of same-sex couples who attend public schools.

“Our kids are also going to be targeted,” Rozsa said. “Our kids have same-sex parents.”

This article originally appeared in <a href="https://www.nytimes.com/2021/06/15/world/europe/hungary-orban-child-sex-lgbt.html">The New York Times</a>.