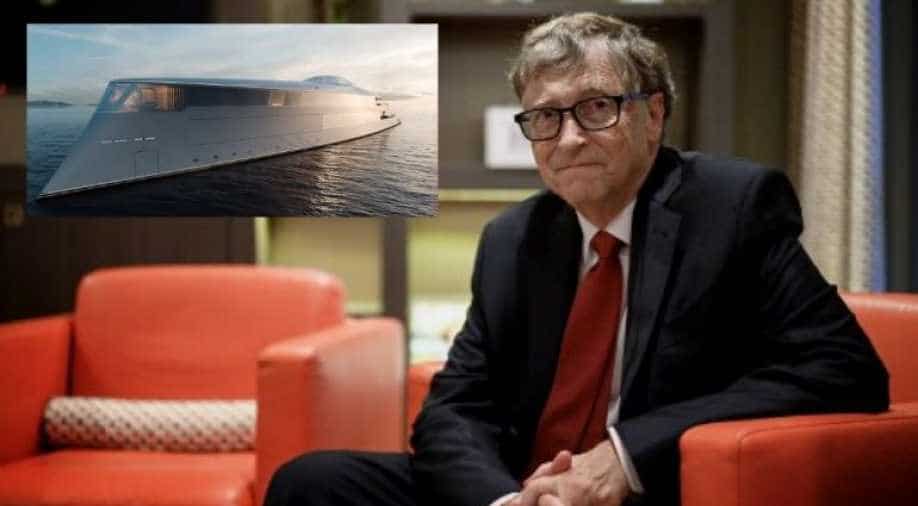 Bill Gates has been one of the prominent faces who has donated huge sums for good cause.

Aqua with an estimated cost of $644 million features an infinity pool, helipad, spa and gym. It is a luxury vessel made by Dutch design firm Sinot which is measured at 112 metres (370 ft) and is run by the hydrogen-electric system.

The yacht is said to be inspired by owners’ lifestyles, the fluid versatility of water and cutting-edge technology. It was first publicised last year at the Monaco yacht show.

The superyacht consists of five decks and can host fourteen guests and can accommodate 31 crew members. The yacht will also consist of gel-fueled fire bowls to further its eco-friendly feature, these fire bowls will allow guests to stay warm outside without having to burn wood or coal.

The most intriguing feature about the yacht is its two 28-tonne vaccum sealed tanks that are cooled to -253 degree celsius, these tanks are filled with liquid hydrogen, which powers the ship.

The fuel will produce power for the two one-megawatt motors and propellors via onboard fuel cells, which combine hydrogen with oxygen to produce electricity. Water will be a byproduct. The vessel is predicted to reach a speed of 17 knots (31.4 km/h) and travel for 6,035 kilometres (nearly London to New York) without refuelling. Diesel will act as the back-up fuel because the number of hydrogen refuelling station is scarce.

According to Britain's Sunday Telegraph, the yacht is predicted to make its first journey in 2024.

Bill Gates has had a long term goal of switching to alternative fuels to cut down the carbon emissions in the world. The 64-year-old is currently ranked second as the world's second-richest man, he has a fortune of  $118 billion. He has never owned a yacht but has rented quite a few of them for his holidays. Recently, he rented 'Serena', a $330 million superyacht.

Bill Gates has been one of the prominent faces who has donated huge sums for good cause. Just this week he donated $100 million to help tackle coronavirus.