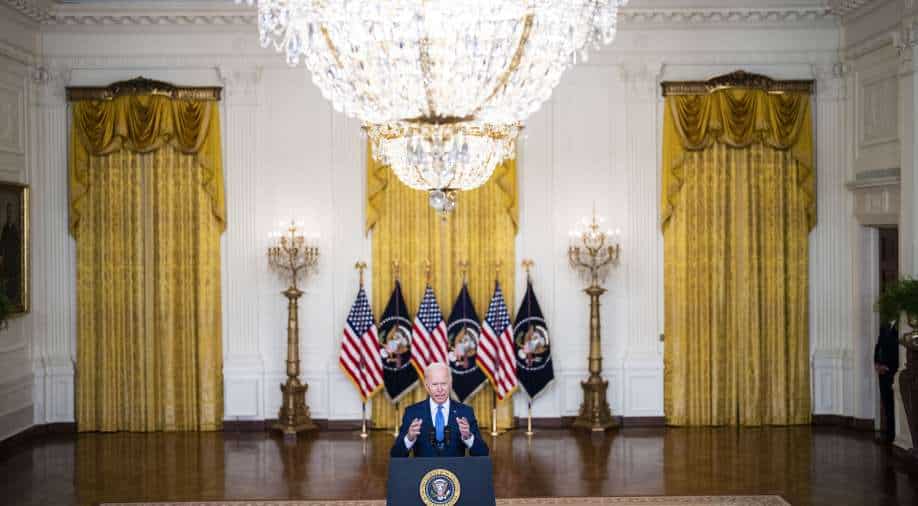 President Joe Biden delivers remarks on the economy from the East Room of the White House in Washington Photograph:( The New York Times )

The bill combines major initiatives on the economy, education, social welfare, climate change and foreign policy, funded in large part by an extensive rewrite of the tax code, which aims to bring in trillions from corporations and the rich

No president has ever packed as much of his agenda, domestic and foreign, into a single piece of legislation as President Joe Biden has with the $3.5 trillion spending plan that Democrats are trying to wrangle through Congress over the next six weeks.

The bill combines major initiatives on the economy, education, social welfare, climate change and foreign policy, funded in large part by an extensive rewrite of the tax code, which aims to bring in trillions from corporations and the rich. That stacking of priorities has raised the stakes for a president resting his ambitions on a bill that could fail over the smallest of intraparty disputes.

If successful, Biden’s far-reaching attempt could result in a presidency-defining victory that delivers on a decadeslong campaign by Democrats to expand the federal government to combat social problems and spread the gains of a growing economy to workers, striking a fatal blow to the government-limiting philosophy of President Ronald Reagan that has largely defined U.S. politics since the 1980s.

But as Democrats are increasingly seeing, the sheer weight of Biden’s progressive push could cause it to collapse, leaving the party empty-handed, with the president’s top priorities going unfulfilled. Some progressives fear a watered-down version of the bill could fail to deliver on the party’s promises and undermine its case for a more activist government. Some moderates worry that spending too much could cost Democrats their seats in the 2022 midterm elections, erasing the party’s control of Congress.

The legislation contains the bulk of Biden’s vision to overhaul the rules of the economy in hopes of reducing inequality and building a more vibrant middle class. But its provisions go beyond economics.

Democrats hope the package will create a pathway to citizenship for as many as 8 million immigrants living in the country illegally, make it easier for workers to form unions, and lower prescription drug costs for seniors. They want to guarantee prekindergarten and community college for every American, bolster the nation’s strategic competitiveness with China, and stake an aggressive leadership role in global efforts to fight climate change and corporate tax evasion.

The plan includes a large tax cut for the poor and middle class; and efforts to reduce the cost of child care, expand access to home health care for older and disabled Americans, and create the first federally guaranteed paid leave for American workers.