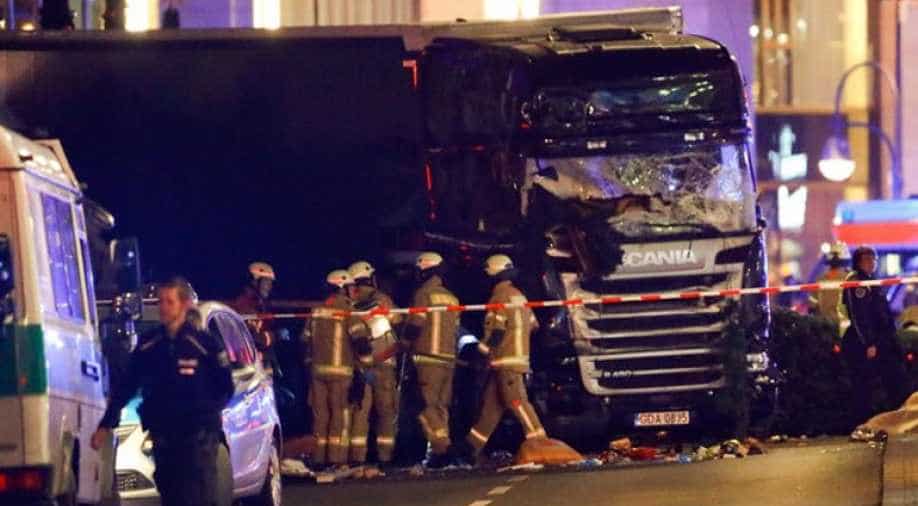 Emma Rushton, a tourist visiting Berlin, told CNN the truck seemed to be travelling at about 40 mph (65 Kmh). Photograph:( Reuters )

At least twelve dead and 48 injured after a truck ploughed into a crowd in Berlin's Christmas market on Monday.

One person has been detained by the police, evidently the driver of the truck.

"A man who was apparently driving the truck was detained," a police spokeswoman told AFP.  "The person riding in the vehicle is dead."

German police said on Twitter, "Currently, there are no indications of further dangerous situations in the city near Breitscheidplatz".

The attack took place late evening near the ruined Kaiser Wilhelm memorial church, which was kept as a bombed-out ruin after World War II.

The truck hurtled into the market at a time when it was most crowded with children and adults shopping.

Jan Hollitzer, deputy editor in chief of Berliner Morgenpost, told CNN, "I heard a big noise and then I moved on the Christmas market and saw much chaos...many injured people," Reuters reported. "It was really traumatic."

Police and ambulances were quickly deployed to the site. Emma Rushton, a tourist visiting Berlin, told CNN the truck seemed to be travelling at about 40 miles per hour (65 kilometres).

German Chancellor Angela Merkel's spokesman said "We mourn the dead and hope that the many people injured can be helped".

The Polish owner of the truck confirmed that his driver was missing.

"We haven't heard from him since this afternoon. We don't know what happened to him. He's my cousin, I've known him since I was a kid. I can vouch for him," transport company owner Ariel Zurawski.

Reminiscent of the attack that took place in Nice in July, when a Tunisian-born man ploughed a 19 tonne truck killing 86 people who had assembled along the beach to watch the fireworks on Bastille Day. The Islamic State group had claimed responsibility for the attack.

No group has claimed responsibility for the attack. Donald Trump has issued a statement in response to the attack, which he blamed Islamic State:

"Our hearts and prayers are with the loved ones of the victims of today’s horrifying terror attack in Berlin. Innocent civilians were murdered in the streets as they prepared to celebrate the Christmas holiday. ISIS and other Islamic terrorists continuously slaughter Christians in their communities and places of worship as part of their global jihad. These terrorists and their regional and worldwide networks must be eradicated from the face of the earth, a mission we will carry out with all freedom-loving partners".