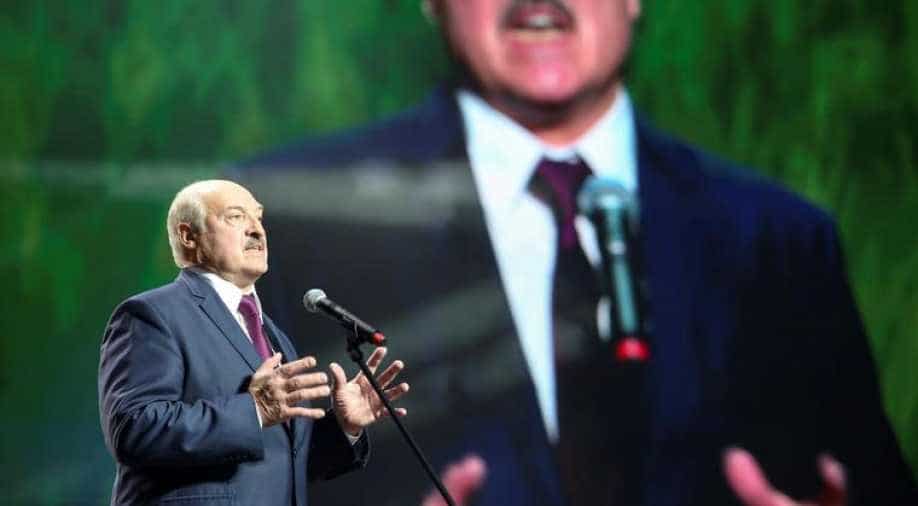 Katerina Bakhvalova, 27, and Daria Chultsova, 23, however, stood defiant and flashed V for victory signs as they smiled and blew kisses to the courtroom ahead of the verdict.

A court in Belarus has sentenced a pair of young television journalists to two years in prison for covering a protest last year.

Katerina Bakhvalova, 27, and Daria Chultsova, 23, however, stood defiant and flashed V for victory signs as they smiled and blew kisses to the courtroom ahead of the verdict.

The two women were detained in November while filming one of the anti-government rallies that swept Belarus after strongman Alexander Lukashenko claimed victory in an August election that the opposition and many Western countries said was fraudulent.

The women were accused of "attracting people to participate in a mass event" via their broadcast and convicted of leading "group actions that grossly violate public order". They had denied their guilt on the first day of their trial earlier this month.

The case also sparked widespread condemnation from press advocacy groups and diplomats in Western countries, with the US embassy in Belarus calling the charges "absurd".

After the protests broke out in August, Belarusian authorities unleashed a crackdown that left at least four protesters dead, thousands in jail and hundreds claiming torture in custody. Bakhvalova and Chultsova, who work for the Poland-based television channel Belsat, were then detained filming a rally on November 15 in support of a protester the opposition believes died at the hands of Lukashenko's security services.

The demonstrator, 31-year-old former soldier Roman Bondarenko, died from brain damage in Minsk after police arrested him following a dispute in a city square that was a meeting place for the opposition.

At the time, investigators said a 31-year-old Minsk resident had shown signs of intoxication, but a doctor speaking on condition of anonymity to independent Belarusian news site Tut.by said medical staff had found no alcohol in Bondarenko's system.

The journalist who published the story, Katerina Borisevich, and the doctor, Artyom Sorokin, were detained on November 19 on charges of "divulging medical secrets, which entailed grave consequences". They are set to go on trial Friday.

The prosecutor general's office said in a statement Thursday it had opened a criminal case into Bondarenko's death.

Eleven journalists are currently detained in connection with the protests, according to the independent Belarus Association of Journalists (BAJ).

On Wednesday a trial also began in the case of leading opposition member Viktor Babaryko, who was arrested in June ahead of the presidential election after he announced he would run against Lukashenko.

The former banker was one of several opposition figures who were arrested or fled ahead of the election.

Several Western leaders have refused to recognise the election results, while the European Union has imposed sanctions on Lukashenko and his allies. Lukashenko, however, continues to receive the backing of Moscow.