Australia: Over 10,000 camels to be culled in a bid to save water 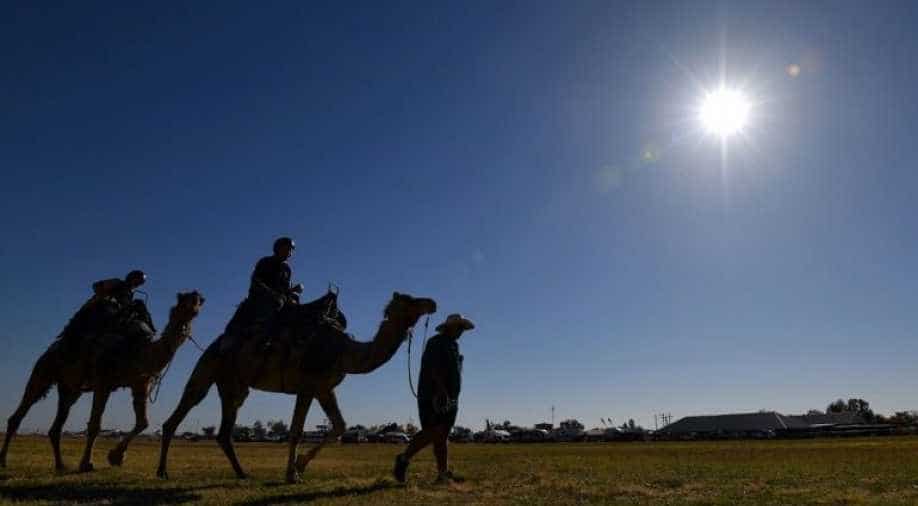 Spectators enjoy a camel ride prior to the day's Birdsville Races in the Queensland town of Birdsville on September 1, 2018. The annual Birdsville races in Outback Queensland attracts thousands of people to the remote town and is a major source of tourist revenue. Photograph:( AFP )

Officials say the drought has created critical animal welfare issues, as camels have died of thirst and often trample on each other to find water.

The Australian government on Wednesday approved an initiative to kill as many as 10,00 feral camels in an aboriginal region using firearms.

Officials in the remote northwest of south Australia approved the cull, which is set to last for five days, during which marksmen in helicopters will use firearms to shoot and kill the camels.

The country apart from being struck by massive bush fires is also facing severe droughts. The feral camels consume too much water in the drought-hit area.

This decision is bound to be controversial, taking into consideration the estimated half a billion animals perished due to the unprecedented bush fires that continue to be uncontrolled.

According to a Facebook post put up by the local administration, the camels were trespassing into properties and trying to drink the water of air conditioner ducts as rising temperatures continue to make the region even more arid.

‘Feral camels breed at such a rate the population doubles every nine years, contributing more greenhouse gases that worsen climate change. One million feral camels emitting one-tonne carbon dioxide per year is the equivalent of having an additional 400,000 cars on the road. With the number continuing to grow as the camel population swells without critically needed management intervention, as is being taken by locals and partners through the development of cull plans’.

The post also seeks federal government to award carbon credits to the region for getting rid of feral animals that were contributing to the emission of greenhouse gases.

Netizens are enraged over the development and have questioned the silence of animal rights groups on the matter so far.

The environment department of the country that has supported this decision. Officials say the drought has created critical animal welfare issues, as camels have died of thirst and often trample on each other to find water.

Australia has experienced its hottest and driest year in 2019, with severe drought causing towns to run out of the water and worsening the raging bush fires.

Interestingly camels were introduced to Australia from India in the 1840s to explore the interiors of the nation. With time Australia became home to the largest wild camel population in the world with over one million of the animals roaming the inland deserts of the vast continental country.

While the culling operation is the biggest in this state in South Australia, countries have in the past resorted to culling the wild for multiple reasons. In 2005 South Africa has used controlled culling as a means of limiting the elephant population in the region.

Draft proposals in 2014 in the United States declared mute swans as prohibited invasive species and outlined plans to eliminate them by 2025. The non-native beautiful swans were believed to be destroying the habitats of native ducks and geese.

In 2016, Finnish authorities had ordered the culling of 20% of the endangered grey wolves.

In 2018, Zambia revived plans to cull 2000 hippos but was forced to cancel plans owing to opposition against the move.

In India, the state of Uttarakhand ordered for the culling of wild boars in 2016 after began venturing outside protected areas. In 2016, Kerala went on a dog culling spree that invited much criticism from animal rights groups. In 2019, the government approved culling of monkeys for a year in Himachal Pradesh, as they were found to be causing a nuisance in non-forest areas.