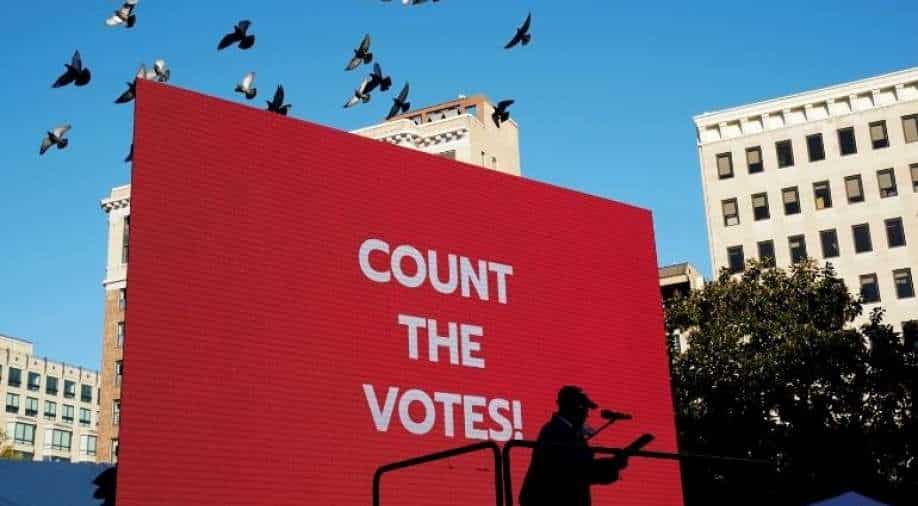 A person speaks on a stage as labor union activists rally at a park near the White House the day after the 2020 U.S. presidential election in Washington, U.S. November 4, 2020 Photograph:( Reuters )

In US elections 2020, both Donald Trump and Joe Biden are currently running neck-and-neck, with the counting of votes still underway in key states of Michigan and Pennsylvania

US election 2020: In US elections 2020, both Donald Trump and Joe Biden are currently running neck-and-neck, with the counting of votes still underway in key states of Michigan and Pennsylvania. | Live updates on US election

Trump even declared his victory before the official count ended, while Joe Biden announced that he will emerge victorious after all the votes are accounted for.

US president Trump had recently called on the counting to stop, while earlier claiming that the results should be declared on the same day as the election - November 3. He also claimed that due to ongoing counting, chances of voting fraud in the elections are high.

But while Republican leaders and Trump administration called on the urgency of vote counting, #CountEveryVote began trending on social media.

In key states like Pennsylvania and Michigan, vote counting is underway. And a ruling by a top court in Pennsylvania had recently allowed counting mail-in ballots that arrive upto 3 days after the election date, something Trump has vowed to challenge.

Finding support among many Democrats #CountEveryVote supporters want all votes - physical, and mail-in to be counted for the final tally.

Many Democrat supporters fear that Trump would simply refuse to accept the results if he loses. In the meanwhile, Trump supporters expressed worry over potential cheating.

Besides asking for all votes to be counted on social media with the hashtag #CountEveryVote, many also hit the streets across major American cities, urging authorities to discard Trump’s claims that the ongoing voting could open the scope of electoral fraud.

Fraud in US elections is rare, and Trump has provided no proof of how it may be undertaken.

Due to the COVID-19 pandemic, many voters, mostly Democrats opted for mail-in voting, which could become a state-by-state in this election.

A coalition called “Protect the Results” claimed to have been organising protests in 500 cities across the country. But as voting intensifies, many such rallies had to be halted.

Take a look at some of the tweets:

We will be counting votes for a while - #EveryVoteCounts. Try to stay calm and even-keeled while the officials do their work. 👍🙏🇺🇸

Remember, this was always the way this was going to go...