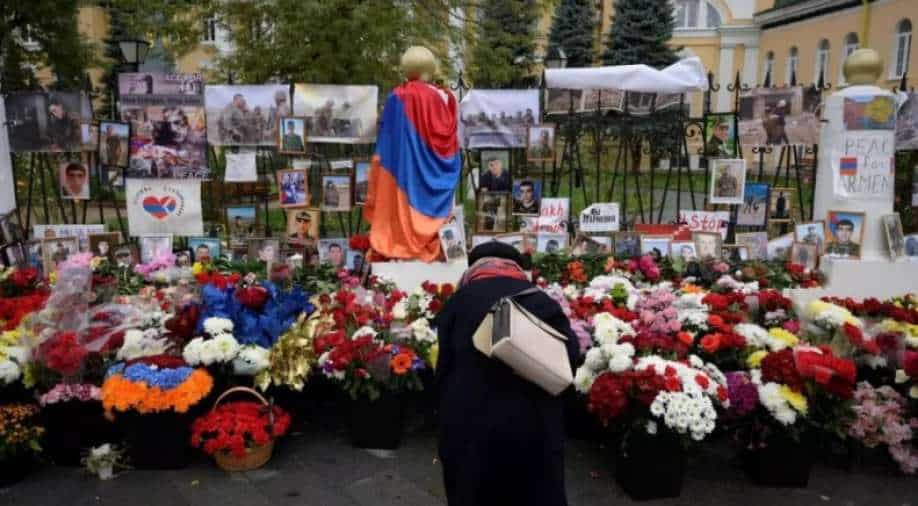 A woman visits a makeshift memorial outside the Armenian embassy in Moscow for Armenians killed during the conflict over the breakaway region of Nagorno-Karabakh, October 20, 2020. Photograph:( AFP )

Russian President Vladimir Putin confirmed that both sides had agreed to "a total ceasefire in the Nagorno-Karabakh conflict zone".

Armenia and Azerbaijan have agreed on another deal with Russia to end weeks of fierce clashes over Nagorno-Karabakh.

Russian President Vladimir Putin confirmed that both sides had agreed to "a total ceasefire in the Nagorno-Karabakh conflict zone". The ceasefire deal came just hours after Azerbaijan admitted to accidentally shooting down a Russian military helicopter flying in Armenia.

Armenian Prime Minister Nikol Pashinyan first announced the signing on social media in the early hours of Tuesday and the Kremlin and Azerbaijan's president Ilham Aliyev later confirmed the news.

"The signed trilateral statement will become a (crucial) point in the settlement of the conflict," Aliyev said in a televised online meeting with Putin.

Putin said Russian peacekeepers would be deployed along the frontline in Nagorno-Karabakh and the corridor between the region and Armenia.

The announcement of a full ceasefire from 1:00 am Tuesday (2100 GMT), which came after a string of Azerbaijani victories in its fight to retake the disputed region, sparked outrage in Armenia.

"I have signed a statement with the presidents of Russia and Azerbaijan on the termination of the Karabakh war," Pashinyan said, calling the move "unspeakably painful for me personally and for our people".

Angry protesters, to this end, stormed the government headquarters in Yerevan where they ransacked offices and broke windows.

Thousands gathered outside the building, calling for the resignation of Pashinyan after he announced the "painful" deal to the end the fighting.

Azerbaijan's President Ilham Aliyev said Pashinyan had been left with no choice but to sign the "historic agreement". "I have taken this decision as a result of an in-depth analysis of the military situation," Pashinyan said, calling the ceasefire "the best possible solution".

The agreement gave Armenia a short timeframe to withdraw its troops from parts of Nagorno-Karabakh and that Russia and Azerbaijan's ally Turkey would be involved in implementing the ceasefire.

The deal would end six weeks of fierce clashes over Nagorno-Karabakh, an ethnic Armenian region of Azerbaijan that broke away from Baku's control during a bitter war in the 1990s.

The conflict -- which simmered for decades despite international efforts to reach a peace deal -- erupted into fresh fighting in late September.

At least 1,000 people have been confirmed killed, including dozens of civilians, but the actual death toll is believed to be significantly higher.

A turning point came on Sunday when Aliyev announced that his forces had captured Shusha, the region's strategically vital second-largest town. Shusha sits on cliffs overlooking Nagorno-Karbakh's main city Stepanakert and on the main road to Armenia, which backs the separatists.

Moscow's defence ministry said two crew members were killed when its Mi-24 helicopter was hit by a man-portable air defence system close to the border with Azerbaijan. A third crew member was injured and evacuated, it said.

Azerbaijan quickly apologised for the "tragic incident" saying the mistake was the result of the "tense situation in the region and increased combat readiness" of its forces.

The helicopter was shot down near the Nakhchivan Autonomous Republic, a landlocked exclave of Azerbaijan between Armenia and Turkey, far from Nagorno-Karabakh.

Meanwhile, anger had already been mounting in Armenia ahead of the deal, with 17 opposition parties on Monday calling on Pashinyan and the rest of his government to immediately resign.

The parties -- including several of the country's largest political groupings -- said in a statement that Armenia's leaders bore "the entire responsibility for the situation" in Karabakh.