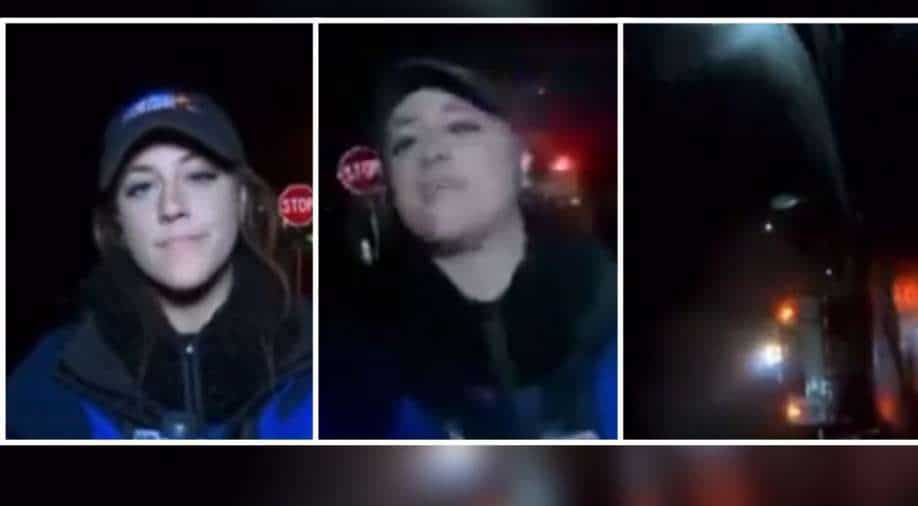 The reporter even said that it was not the first time she was hit by a car while reporting the news. Photograph:( Twitter )

A news reporter based in the United States grabbed attention when she finished the reporting despite being suddenly struck by a car during a live shot.

Immediately after the scary hit, the reporter named Tori Yorgey for NBC affiliate WSAZ of Huntington, West Virginia stood up and finished the reporting.

The incident happened when Yorgey was reporting live from Dunbar on the January 19th evening about a local water main break when a four-wheeler hit her from behind.

After the collision, the reporter bumped into the camera and she fell into the nearby snow. She was heard saying: "Oh my god, I just got hit by a car, but I'm OK."

She even revealed that it was not the first time she was hit by a car while reporting the news. She said: "I actually got hit by a car in college too just like that."

Besides getting up, Yorgey also spoke with the driver of the car that hit her. While the camera was adjusting, the driver can be heard apologising for off-camera.

The news reporter also revealed that it was her last week at the job, She said, "You know it's my last week on the job and I think this would happen specifically to me, Tim [news caster]."

She was asked about the impact of the collision, she replied, "I don't even know, Tim. My whole life just flashed before my eyes, but this is live TV and everything's OK".

She added, "I thought I was in a safe spot, but clearly we might need to move the camera over a bit, so let me do that while I'm thinking of it."

Reporter gets hit by car on live tv, gets up and keeps working pic.twitter.com/86dtuUxfL7