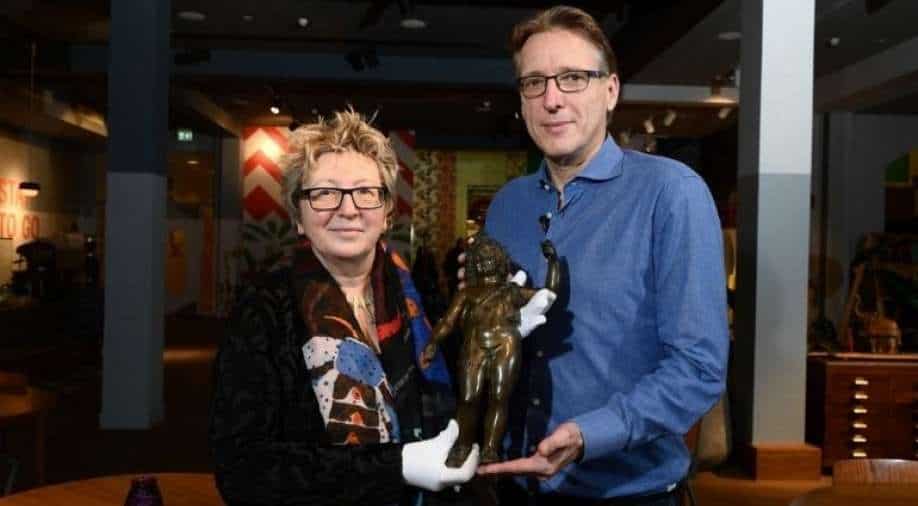 Dutch art detective Arthur Brand (R) hands over the retrieved Roman statue of Dionysus from the first century to Catherine Monnet (L), director of the French museum of Pays Chatillonais, from where it was stolen in 1973 in Amsterdam Photograph:( AFP )

One of France's most important treasures, which had been stolen almost 50 years ago has been returned by a Dutch art sleuth.

The 1st-century bronze sculpture statue of the god Bacchus had been stolen in December 1973 from Musee du Pays Chatillonnais in eastern France.

For the heist, thieves smashed a window, crawled through the bars, and pilfered the 40 centimetres statue of the god of wine.

After finding the statue, Arthur Brand dubbed the "Indiana Jones of the Art World" for his exploits, handed it back to the director of the French museum.

According to him, "The criminals made off with some Roman antiquities, around 5,000 Roman coins,  but more importantly, the bronze statue of Bacchus as a child."

"The loss to the museum and the community was enormous. One of their most precious antiquities has been stolen."

"Because back then there was no proper catalogue for stolen art, the statue disappeared into the underworld and was thought to have been lost for ever."

Brand explained that an Austrian collector bought it legally on the open market where it had probably been sold more than once over the last few decades.

"But the owner was shocked to learn that the piece had been stolen and wanted to give it back to the museum. Under French law, he had to be paid a small amount -- a fraction of the statue's price which could be millions of euros, for 'safekeeping'," Brand said.

Catherine Monnet, the director of the museum described the return of a statue as ''an emotional moment.''

"When I saw it now for the first time, I just realised how much more beautiful it is than the copy we have had on display," she said.

The museum is famed for its collection of Roman artefacts from the nearby archaeological dig site of Vertillum, an ancient Gallo-Roman village first excavated in 1846.