Bank robbery like Money Heist executed by thieves in Brazil 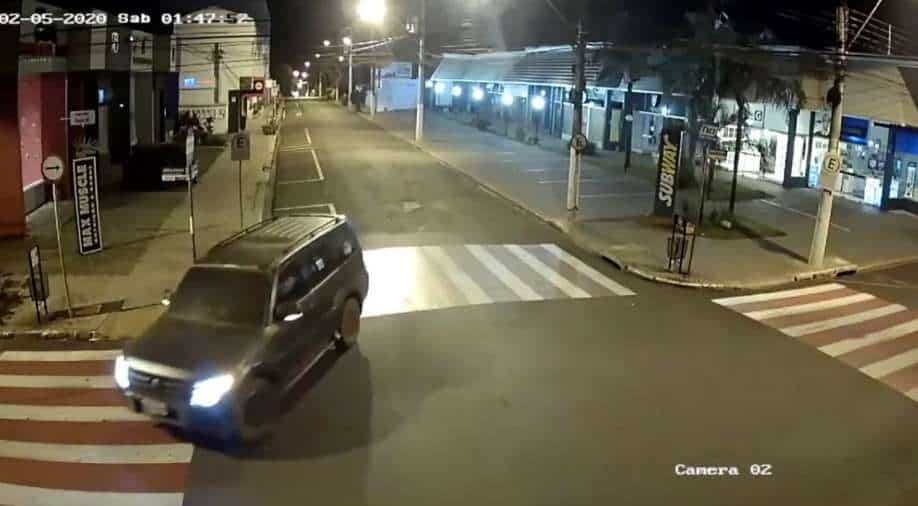 An organised ''crime gang'' besieged Criciúma, a city in southeast Brazilian city early Tuesday, ransacking bank offices, taking prisoners, and shooting, at any rate, two individuals, as indicated by the chairman and the police.

Dec 1: People take money scattered on the floor after a mega robbery in the city of Criciuma - Brazil. The gang looks well trained and supported by heavy armory. The modality of crime is called 'Novo Cangaço' pic.twitter.com/4SCUVM3ztK

The amount of money stolen from the heist in Criciúma by the armed robbers has not yet been specified. Criciúma, with a populace of more than 133,000 starting at 2010, is in the territory of Santa Catarina and is viewed as the focal point of Brazil's earthenware and floor tile industry.

A military police leader said a cop was among those shot. Their condition was not promptly clear.

The attack started not long before 12 PM Monday and proceeded into Tuesday morning, enduring about 60 minutes. Clésio Salvaro, the city hall leader of Criciúma, said in a post on Twitter not long before 2 a.m. neighborhood time that the city, which is on the Atlantic coast, was enduring an onslaught, and requested occupants to remain at home.

"Criciúma is the objective of a significant attack," he composed. "Along with the military specialists and security powers, we proceed to screen and follow current realities. Remain at home."

Salvaro disclosed to Radio Gaúcha that three or four destinations had been plundered by men he called "scoundrels."

"I have no clue about where they are from, yet they are particular," he said. "We have never encountered this throughout the entire existence of the city."

Salvaro added that around six individuals had been abducted, yet they were later liberated. "I conversed with them. They are well. The data we have is that everybody was delivered," Salvaro said in a meeting with GloboNews, the biggest media source in Brazil.

He said that the city's convention was not to take shots back at the aggressors, to ensure the populace. He additionally said the police wanted to follow the desperados to recover the cash. He didn't state what amount had been taken.

Around 6 on Tuesday morning, four individuals accepted to be associated with the heist had been captured, and the police had recuperated a portion of the cash the assailants had taken, neighborhood reports said.

Occupants via web-based media revealed hearing boisterous gunfire, as per Globo. Video film online indicated individuals snatching what gave off an impression of being money off the roads. On Twitter, others detailed that the aggressors had bazookas and bombs and were burning down structures, in what they depicted as a scene looking like a thriller.

The gang of 'Novo Cangaço', leaving the city of Criciuma, Brazil after the mega robbery that occurred on the night of Dec 1st, 2020. Brazil would become a new Wild West?pic.twitter.com/kaxqOqpnSM

The Military Police of Santa Catarina — a state office with various brigades — were brought in and were looking for fortifications to face the gathering, as indicated by neighborhood reports.

Cristian Dimitri Andrade, a Military Police authority in Criciúma, told journalists that the aggressors were "a few men with rifles, long weapons," and depicted them as "a coordinated wrongdoing group, which works in bank burglary." He said two individuals, including a cop, had been shot.

"We are getting data from inhabitants who send us photographs and recordings," he told Engeplus, a neighborhood media source.

The police couldn't quickly be gone after the remark.

Gil Diniz, state deputy of Sao Paulo said ''What is happening in Criciúma right now is what has been happening in the interior of São Paulo and we call it “Novo Cangaço”. Heavily armed bandits assault and bring terror to residents. Let no policeman be hurt, the PM send all the bad guys to hell!

Bank burglaries in Brazil, which has among the most noticeably awful wrongdoing and manslaughter rates on the planet, are not really remarkable. As of late, groups have endeavored to burrow their approach to millions through passages, have exploded explosives to burglarize bank offices, and have exploded money machines in endeavors to extricate cash.

In 2005, hoodlums leased a house one square from a bank, set up a phony cultivating business, and went through a quarter of a year burrowing a 262-foot burrow under a bank in the shoreline city of Fortaleza. They snatched over $50.8 million, the specialists said.

In 2017, the Brazilian police found a passage complete with electric lighting and ventilation, impeding the arranged theft of a São Paulo part of the public authority claimed Banco do Brasil. Sixteen suspects were captured.