After spiralling in sky at 125mph, skydiver calls survival a 'miracle' 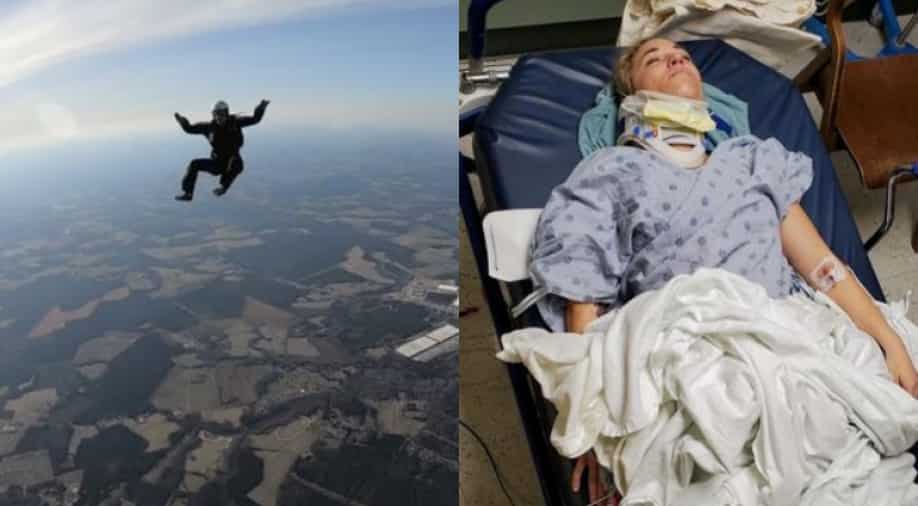 In this picture, Jordan Hatmaker can be seen skydiving (L), and in Sentara Norfolk General Hospital after sustaining several injuries due to her accident. (Credit: Jordan Hatmaker) Photograph:( Others )

Jordan Hatmaker had jumped from a plane at the height of 13,500 feet but after 20 seconds she found herself on the ground with a broken leg and an injured spinal cord

A skydiver described her survival from smashing into the ground as a ''miracle'' after she spiralled from the sky at 125mph.

Jordan Hatmaker had jumped from a plane at the height of 13,500 feet but after 20 seconds she found herself on the ground with a broken leg and an injured spinal cord.

"Everything happened really quickly. I didn't have any thoughts because I was spiralling so I didn't know what was going on, I was just in strategy mode," she told 'The Daily Mirror'.

Explaining what went through her mind during the horrific accident, she said, "First I tried to push myself off the ground, and when I couldn't move anything my first thought was I was paralysed and I was yelling that out.''

“I’ve never heard sounds like those come out of my body. I screamed bloodcurdling screams," she told the British daily newspaper.

Jordan said the pilot chute got stuck around her leg and when she tried to free herself her reserve chute was automatically released.

When people saw her lying on the ground they took her to the Sentara Norfolk General Hospital.

"They [doctors] said we don't know what kind of mobility she's going to have, but they didn't think I was going to be paralysed because I could wiggle my toes."

Also see | For the first time in aviation history, a pilot will take off in one plane and land in another

"I was very thankful to be alive, that was the thought I had most often. I had a lot of hope that I would walk again, even though I couldn't lift my legs or move them back and forth.''

"I had a lot of hope that I would do everything I wanted to do again," she added.

However, despite sustaining several injuries and being hospitalised for two weeks, the adventure seeker is still optimistic.

"I don't think that you should give up things that you love just because an obstacle was put in your way, life is too short and you should do what makes you happy,'' Jordan said.

"I really hope to send a message of trying to find the silver lining in whatever situation you're in. You never know how strong you are until you have to be, don't underestimate yourself."

When she returned home from the hospital she had a hard time doing anything but instead of getting demotivated, the resilient woman took it as a challenge.

"That moment I could only lift it maybe half an inch off the bed but it was just so great to conquer a milestone. It was a sign of progress and I was really thrilled and excited, it just gave me more motivation to keep going.

"I started walking three months to the day of the accident."

According to Jordan, ''It doesn't feel real, it feels so surreal that even happened but I'm thankful that the accident happened.''

''I feel like there's a like lot of growth that came out of it, and I really think there's opportunity in tragedy,'' she added.

The 35-year-old woman, who is from Virginia fell in love with skydiving in 2015. She had jumped from her airplane five times till 2020 itself.