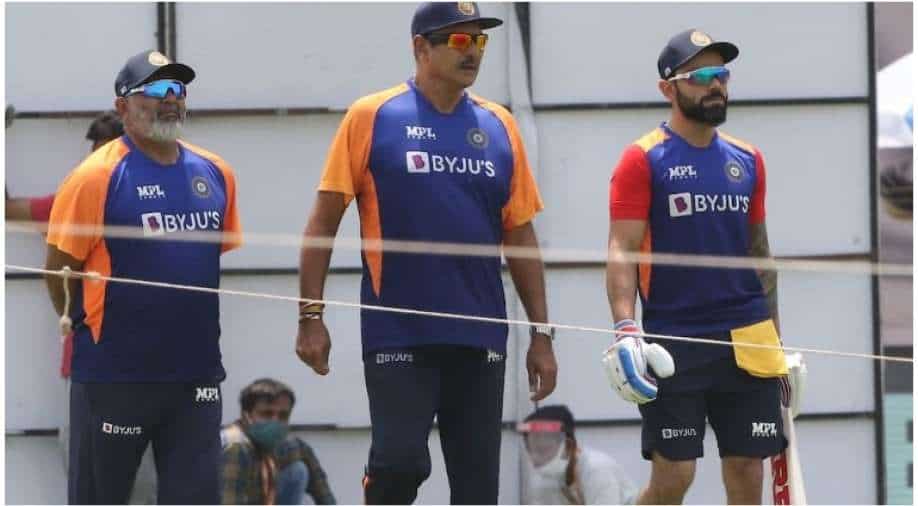 Virat Kohli took to social media to express his gratitude to India's outgoing coaching staff - Ravi Shastri, Bharat Arun and R Sridhar and stated that their contributions for Team India will always be remembered.

Virat Kohli-led Team India bowed out of the T20 World Cup 2021 edition, being held in the UAE, in the Super 12 round. The one-time winners weren't anywhere close to their best in their opening two fixtures, versus Pakistan and New Zealand respectively, and paid a heavy price as they were shown the exit door in the group stage itself.

While Kohli & Co. did bounce back to win their last three encounters handsomely, it was too late by then as New Zealand and Pakistan confirmed their slots in the semi-finals from the same group, i.e. Pool B. With India's exit, Kohli's tenure as T20I captain came to an end whereas the likes of head coach Ravi Shastri, fielding coach R Sridhar and bowling coach Bharat Arun's respective tenures also concluded.

Kohli, thus, expressed his gratitude for India's outgoing coaching staff and wrote on social media, "Thank you for all the memories and the amazing journey we've had as a team with you all. Your contribution has been immense and will always be remembered in Indian cricket history. Wish you the best moving forward in life. Until next time."

Thank you for all the memories and the amazing journey we've had as a team with you all. Your contribution has been immense and will always be remembered in Indian cricket history. Wish you the best moving forward in life. Until next time ⭐🤝 pic.twitter.com/42hx4Q7cfq

Under Shastri-Arun-Sridhar, Team India excelled across formats and won bilateral ODI series in South Africa, New Zealand, back-to-back Test series in Australia, T20I series in England and dominated at home. They ended as semi-finalists in the 2019 ODI World Cup, runners-up in the WTC final. More than the victories, Shastri ensured India became a well-oiled and competitive side playing both at home and while being on the road. On the other hand, the Indian pacers flourished under Arun whereas Sridhar made India a daunting force to reckon as a fielding unit.

Rahul Dravid will now officially take over from Shastri as India's head coach with the start of their home series versus New Zealand, from November 17.