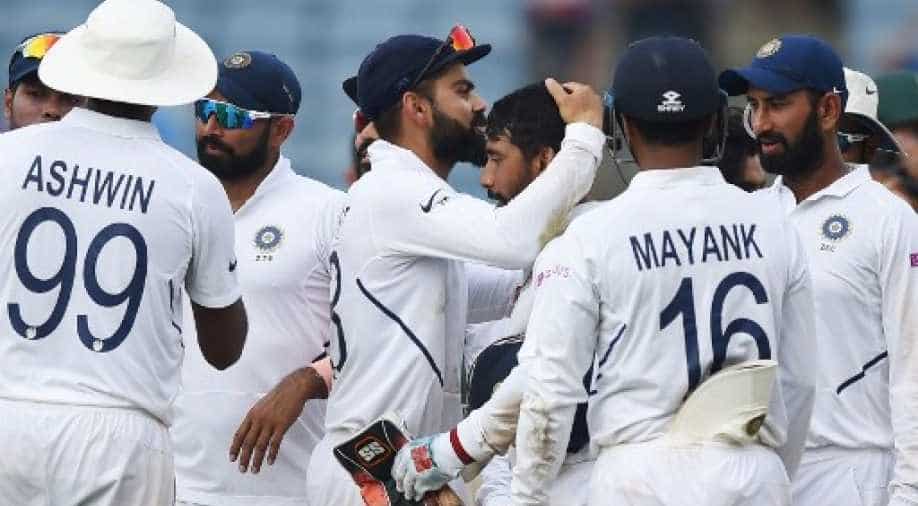 The tourists were dismissed for 189 after following-on in the final session of day four in Pune, as India took an unassailable 2-0 lead in the three-match series.

Umesh Yadav led an inspired bowling display as India thrashed South Africa by an innings and 137 runs in the second Test to clinch a record 11th-straight series triumph at home on Sunday.

The tourists were dismissed for 189 after following-on in the final session of day four in Pune, as India took an unassailable 2-0 lead in the three-match series.

Vernon Philander, who made 37, and Keshav Maharaj, who scored 22, put up a brief resistance during their 56-run eighth-wicket stand, but Yadav broke through with the wicket of Philander.

He took his third wicket after sending back Kagiso Rabada for four and spinner Ravindra Jadeja trapped Maharaj lbw to wrap up the game as India went past Australia's 10-series wins on home turf. Jadeja returned figures of 3-52.

Skipper Virat Kohli set up the win with his unbeaten 254 -- a record seventh double-century for the star batsman -- in India's 601 for five declared.

Ravichandran Ashwin struck twice in the morning session after the tourists started their second innings trailing by 326.

Ashwin had du Plessis -- who promoted himself to number four in the batting order -- caught behind for five with wicketkeeper Wriddhiman Saha holding on to a juggling catch.

Paceman Ishant Sharma struck with his second ball of the day to trap Aiden Markram lbw for nought.

Markram had a long discussion with Elgar over whether to review the on-field call but walked, only for the replays to suggest the ball would have gone over the stumps.

The Proteas were dismissed for 275 at the end of day three in response to India's 601-5 declared, 127 short of the follow-on.

South Africa put up some resistance in their first innings with Maharaj, who made 72, and Philander, 44 not out, putting on 109 runs for the ninth wicket to frustrate the Indian bowlers.

Ashwin broke the stand with Maharaj's wicket and then got last man Rabada to return figures of 4-69.

The match will also be remembered for his Kohli's marathon knock as he surpassed Don Bradman's tally of 6,996 runs.

Kohli, who now has 7,054 runs from 81 Tests, put together crucial partnerships including a 225-run fifth-wicket stand with Jadeja, who made 91, to extend India's dominance.

The two teams now head to Ranchi for the final match starting October 19.