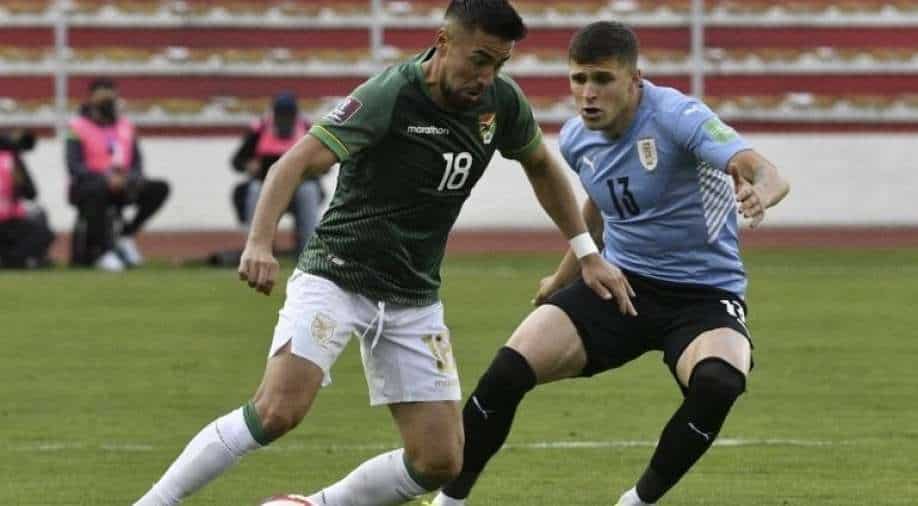 Bolivia scored twice in the first half then missed a penalty and had a man sent off in a 3-0 win over Uruguay on Tuesday, as they joined Peru and Ecuador in recording wins that boosted their chances of qualifying for the 2022 World Cup in Qatar.

Uruguay's defeat marked the first time they had lost four qualifiers in a row and further tightens the South American race for a place in next year’s finals.

Argentina joined Brazil as confirmed participants in Qatar after they drew 0-0 and Ecuador took a huge step closer to securing their spot with a 2-0 win in Chile.

Pervis Estupinan scored the opening goal after nine minutes and Chile, who had Arturo Vidal sent off with just a quarter of an hour gone, conceded a second to Moises Caicedo in second-half stoppage time.

The result means Ecuador are third in the 10-team qualification table with 23 points, six points clear of Colombia and Peru with only four games remaining.

Uruguay now have 16 points, the same as Chile. Bolivia and Paraguay are a point behind. Second-bottom Paraguay have 13 points and Venezuela have seven.

The top four qualify automatically for Qatar, and the fifth-placed side go into an inter-regional playoff.

Colombia drew 0-0 at home to Paraguay, their fourth 0-0 draw in their last five games and their fifth in a row without scoring.
Peru also boosted their chances of qualifying with a 2-1 win away in Venezuela.

Gianluca Lapadula put the visitors in front with a header after 18 minutes, only for Darwin Machis to equalise seven minutes into the second half.

In La Paz, Juan Carlos Arce put Bolivia ahead after 29 minutes when goalkeeper Fernando Muslera let his speculative cross sneak through his hands into the net, and Marcelo Moreno made it two with a header seconds before halftime.

Moreno, the top scorer in the South American qualifiers, missed a penalty after 62 minutes and, although substitute Carmelo Algaranaz was sent off 12 minutes later, Arce netted his second and Bolivia’s third with 11 minutes to go.

The result means Bolivia have 15 points and are in eighth place in the table, but just two points outside the qualification spots.