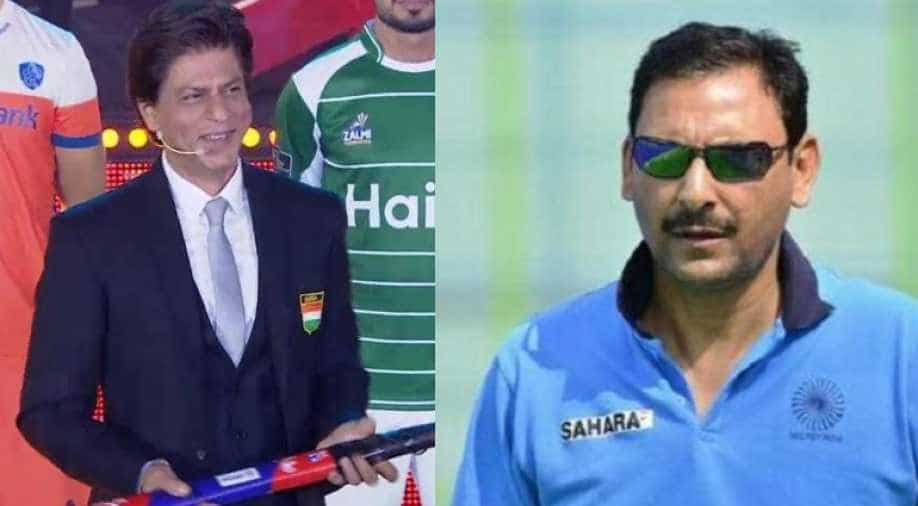 Harendra Singh and Shah Rukh have played in together in school hockey tournaments of Delhi.

The Hockey World Cup has kick-started with a grand opening ceremony at the Kalinga Stadium in Bhubaneshwar.

Apart from the teams of the 16 participating nations, the event saw film stars Shah Rukh Khan, Madhuri Dixit and music director AR Rahman enthral the audience with their performances.

Shah Rukh recreated his Chak De! India dialogues as he recalled his connection with national sport and said  "I did play a little bit of hockey in school and college. I used to play as a centre-forward, and right opposite me was obviously a goalkeeper,".

There is one more connection between Shah Rukh and hockey that is present coach of Indian field hockey Harendra Singh.

Harendra Singh and Shah Rukh have played in together in school hockey tournaments of Delhi.

Shahrukh Khan was the centre-forward of St. Columba's team and Harendra Singh was a goalkeeper and forward for Union Academy school.

"Shah Rukh used to come at Hanuman Temple, Connaught Place after school and stay with Pandit Jugal Kishor Sharma house. He was St Columbus student and I was with Union Academy School," revealed Harendra Singh.

Today at the opening ceremony India's reel life and real hockey coaches were present together once again.

Harendra expressed confidence that his young side in which seven out of 18 players are from the junior World Cup squad.

Conceding last-minute goals has been India's perennial problem in the last few years but Harendra said it' is with all hockey playing nations.

"We always discuss India concede a last-minute goal to lose. It has happened in the last 4-5 years, including the Asian Games. But that doesn't only happen with the Indian team. I can give you history where other teams also have lost the same way," he said.