'We have one eye on the next World Cup,' says India's T20 skipper Rohit Sharma 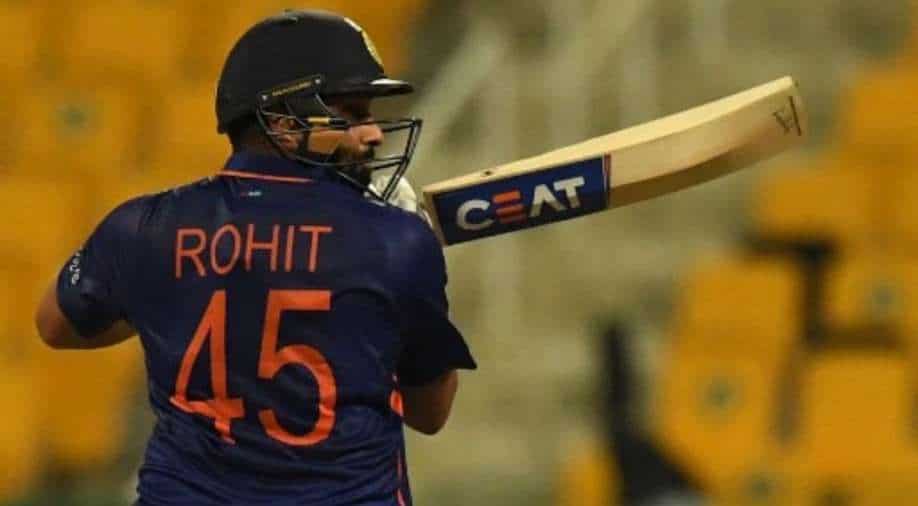 Action image of Rohit Sharma from T20 World Cup 2021, where India failed to make it to the semi-final. Photograph:( AFP )

As India bowed out of T20 World Cup 2021, Rohit Sharma has made it clear that the team is aiming for the next T20 World Cup. Although they have time ahead, but the team will try their options

The Indian cricket team is all set to press the reset button and move forward after the ICC T20 World Cup's debacle where the Virat Kohli & Co., who were pre-tournament favourites to win the title, failed to make it to the semi-final of the event.

In the leadership of new T20 skipper Rohit Sharma and under the guidance of newly-appointed head coach Rahul Dravid, Indian cricket is expected to go through changes in the twenty-over format and a similar thought was re-iterated by Rohit, during India's first T20I of a three-match series against New Zealand on Wednesday (November 17).

During the toss, Rohit said that the team is aiming for the next T20 World Cup, scheduled to be held in the second half of 2022. Rohit said, "We have one eye on the next World Cup, it's a lot of time ahead, we'll try our options, some results might not be immediate, but the process will be crucial."

ALSO READ | Watch: Rohit Sharma and Rahul Dravid recall their interaction in 2007: 'I was over the moon'

🎥 Head Coach Rahul Dravid rekindles his first meeting with a young @ImRo45 & lauds the #TeamIndia T20I captain for his contribution towards the Indian cricket. 👏 ☺️#INDvNZ pic.twitter.com/croLaIElLu

The 34-year-old Rohit took up as India's T20 skipper after Virat Kohli stepped down from the post citing workload management. Kohli, who continues to be India's ODI and Test captain, has been rested for the home series against New Zealand.

Besides Kohli, pacers Jasprit Bumrah and Mohammed Shami and all-rounder Ravindra Jadeja. Hardik Pandya has been dropped. Ruturaj Gaikwad, Venkatesh Iyer, Avesh Khan and Harshal Patel have been brought in.

On the other hand, New Zealand are playing the home side on the back of a defeat in the cricket T20 World Cup final to Australia in Dubai. In the absence of Williamson, Tim Southee will be the standing skipper for the visitors as Kane Williamson opted out of the short format series.