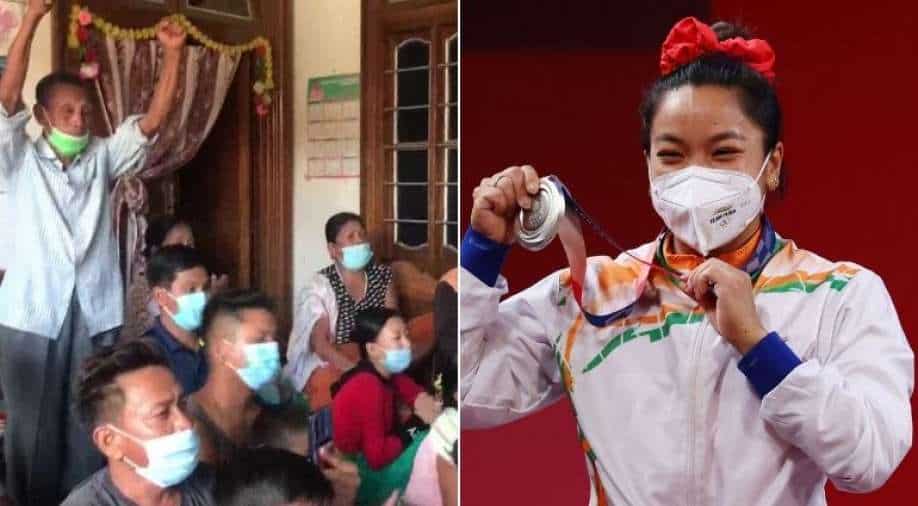 "We are very happy today. This is a result of her hard work. India and Manipur are proud of her," her relative in Imphal said.

Indian weightlifter Mirabai Chanu, who won an elusive silver medal at the Tokyo Olympics 2020 in Weightlifting Women's 49kg category, said that she is 'very happy' after winning the medal. "The entire country was watching me and they had their expectations, I was a little nervous but I was determined to give my best...I worked really hard for this," she told the reporters. China's HOU Zhihu, who lifted a total of 210kg (94+116), clinched the gold medal and created an Olympic record. Aisah Windy Cantika of Indonesia won the bronze medal with 194kg (84+110).

IN PICS | Tokyo Olympics: From PV Sindhu to Deepika Kumari - Top Indian athletes to look out for!

From Prime Minister Narendra Modi to President Ram Nath Kovind, the entire nation congratulated the Manipur-born weightlifter on her stunning win. However, the celebrations in her home town were rather special. Family and neighbours of Mirabai Chanu reacted while watching her win the Silver medal for India. "We are very happy today. This is a result of her hard work. India and Manipur are proud of her," her relative in Imphal told ANI.

#WATCH | Manipur: Family and neighbours of weightlifter Mirabai Chanu burst into celebrations as they watch her win the #Silver medal for India in Women's 49kg category. #OlympicGames pic.twitter.com/F2CjdwpPDc

On being asked whether she thought she could go for gold, Chanu said, "I tried my best to win gold medal, I wasn't able to win gold, but I really tried. when I did 2nd lift, I understood I'll bring a medal along with me."

Chanu lifted 84kg and 87kg successfully. She began with an 84kg lift in her first attempt in the snatch segment and went on to improve with an 87kg lift. However, she failed to lift 89kg as she was placed in the second spot and became the second Indian weightlifter to win an Olympic medal after Karnam Malleswari, who had won the Olympic medal (Bronze) while competing at the 2000 Sydney Games in the women’s 69kg weight category.