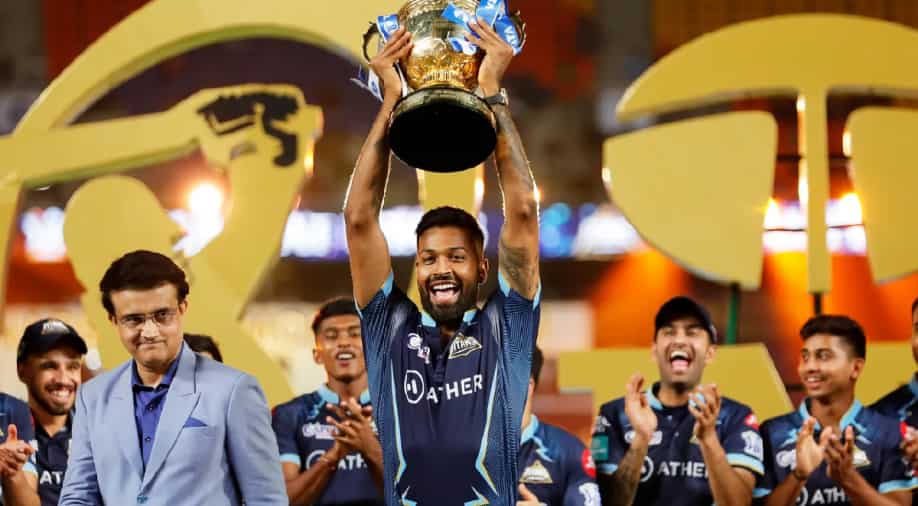 Gujarat Titans (GT) skipper Hardik Pandya created several records as he led his team to a maiden IPL triumph in their debut season. The Titans defeated Rajasthan Royals by 7 wickets in the IPL 2022 final as Hardik won his fifth trophy as a player.

Not many had given Hardik Pandya-led Gujarat Titans (GT)a chance ahead of the start of the Indian Premier League (IPL) 2022 earlier this year. The debutants failed to impress many with their tactics at the mega auction and were far from favourites for even a spot in the playoffs. However, Gujarat Titans went on to defy all the odds to beat Rajasthan Royals in the final on Sunday (May 29) and lift the IPL 2022 title. The Titans won their maiden IPL title in their debut season in the league to create history.

Hardik was exceptional as captain throughout the season for the Titans and also delivered a match-winning performance in the final. He stepped with the ball when his side needed him the most ad bowled a terrific spell against the Royals to finish with a three-wicket haul in the final.

Hardik finished with figures of 3/17 in his four overs to help GT restrict RR to a low-key total of 130/9 in 20 overs before scoring crucial 34 runs with the bat in the run chase. Gujarat Titans won the final comfortably after chasing down the target of 131 runs without breaking a sweat as Hardik lifted his fifth IPL trophy as captain.

The Gujarat Titans captain achieved some special feats and created some new records with his heroics in the final and the remainder of the season. The star all-rounder, who finished the season with 8 wickets and 487 runs in 16 matches became only the third captain to win a Man of the Match award in an IPL final and also surpassed MS Dhoni in the list of players with the highest number of IPL trophies.

Here is a look at some special feats achieved by Hardik Pandya in IPL 2022:

MS Dhoni is one of the most successful captains and players in the history of the Indian Premier League. Dhoni has led Chennai Super Kings to four IPL titles as captain. However, Hardik has now surpassed him on the list of most successful players in IPL history. Hardik has now won a total of five IPL titles - 4 with Mumbai Indians and 1 with Gujarat Titans. He is only behind MI skipper Rohit Sharma, who has six IPL titles to his name as a player.

Thanks to his all-round heroics, Hardik became only the third captain after Anil Kumble and Rohit Sharma to win the Man of the Match award in an IPL final. Hardik contributed with both the bat and the ball for his side as he picked up three wickets and scored 34 runs against RR in the final to join Rohit and Kumble in the elite list.

After leading Gujarat Titans to their maiden title triumph on Sunday, Hardik also became the second-youngest captain to achieve the feat. The 28-year-old enjoyed a phenomenal run as the captain of the side in their debut campaign and led them to glory. Rohit Sharma remains the youngest captain to win an IPL trophy at the age of 26 in 2013.

With his all-round effort for the Titans in the final against Rajasthan Royals, Hardik also achieved a special feat in T20 cricket. The star all-rounder became the first captain to score 25+ runs and pick up three wickets in the final of a T20 tournament.