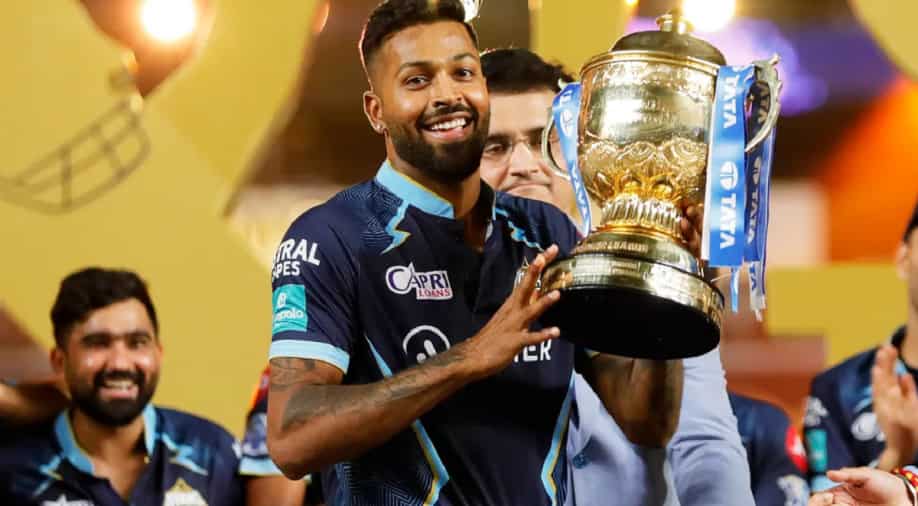 Gujarat Titans (GT) skipper Hardik Pandya said he considers himself lucky to have won five IPL finals so far after leading the debutants to their maiden title this season.

Gujarat Titans (GT) capped off a fabulous season by winning the Indian Premier League (IPL) 2022 title after defeating Rajasthan Royals (RR) in the final of the tournament at the Narendra Modi Stadium in Ahmedabad on Sunday (May 29). It was yet another clinical all-round performance from the Titans, who played some phenomenal cricket throughout the tournament. GT skipper Hardik Pandya has now won all five IPL finals that he has been part of in his career so far.

While it was an excellent team effort from the Titans, Pandya led from the front with both the bat and the ball. He bowled an exceptional spell during Rajasthan Royals' innings to restrict Sanju Samson & Co. to just 130 runs finishing with figures of 3/17 in his four overs before playing a crucial knock of 34 runs during his side's run chase.

Pandya hailed his teammates after the victory and said the Titans have set the right example for the others to follow by showcasing that playing as a team will always help you in winning tournaments. He also said he has been lucky to have managed to win five IPL finals so far in his career.

"This is the right example for any team in the world. If you can play as a team and build a good unit with genuine people around, wonders can happen. I and Ashu pa, we like to play proper bowlers. Batters can obviously chip in, but most of the time I have seen in T20 cricket - it's a batter's game but bowlers win you games. A lot of times we won the games as well, but we always spoke about what are the things we missed out and how we can get better from here. Everyone chipped in. Count myself lucky winning 5 finals, it's been exciting," Pandya said after leading his side to their maiden IPL triumph.

"This is going to be a special one. We spoke about creating a legacy. Generation to come, everyone will remember this was the team who started this journey and to win the championship first year is very special," he added

Pandya, who had only played for Mumbai Indians in his IPL career before joining Gujarat Titans this year, had been part of four finals with the Rohit Sharma-led side. He ended up on the winning side in all four of the summit clashes. He is now a part of an elite list of players in the IPL who have won the trophy as many as five times.

Gujarat Titans were far from favourites at the start of the season and not many had given them a chance to script a fairytale run in their debut season after what transpired for them at the mega auction. However, the likes of David Miller, Rahul Tewatia, Rashid Khan and Hardik himself kept stepping up on different occasions to help the team win some games from difficult situations and create history.